So I’m sitting in church a couple of weeks back, and a friend came over and told me she was getting rid of a chandelier and wanted to know if I might like to have it.  It seems the word has gotten around that I have a thing for chandies.  I have 16 hanging in my home, and I’m not the least bit ashamed of it.  She described it as sparkly and big with lots of crystals.   She had me at sparkly.

Anywho, I met her in the church parking lot last week to take my new baby home.  It rattled around the backend of my Pathfinder, crystals dropping and rolling everywhere.   Here she is! 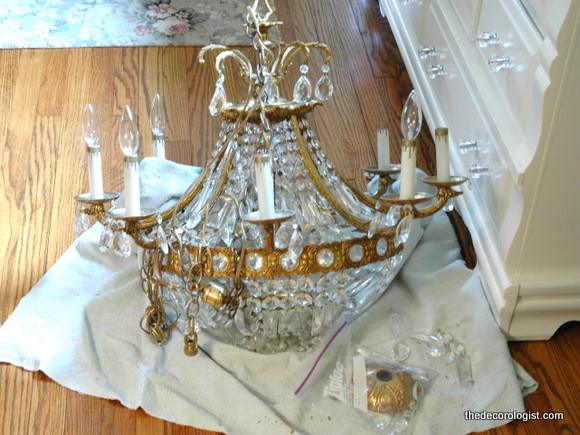 French Empire, baby!  My favorite style of chandelier.  She needs a little TLC, but isn’t she a beauty?

So, here’s the French Empire chandelier that is hanging in my dining room now.  It has been one of my favorites among my light fixtures for some time now.  It’s staying where it is.  And, yes, those are fake owls perched on it – I have an enchanted forest obsession right now, and I’m not ashamed of that either (not very, anyway). 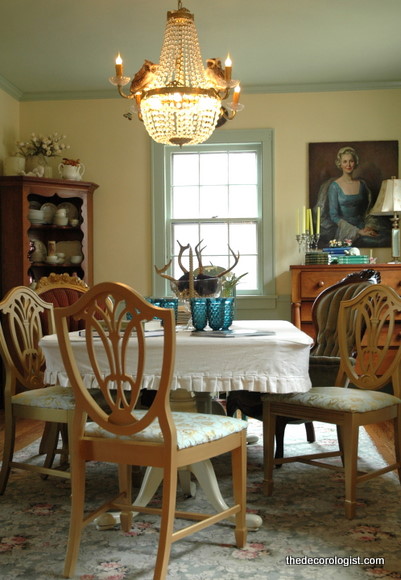 My dining room opens into my living room, like in an L-shape.  I have no wiring in my living room ceiling, so I have this candelier hanging for effect only.  It’s ok, but now that I’ve met my new chandie, I have quite a dilemma! 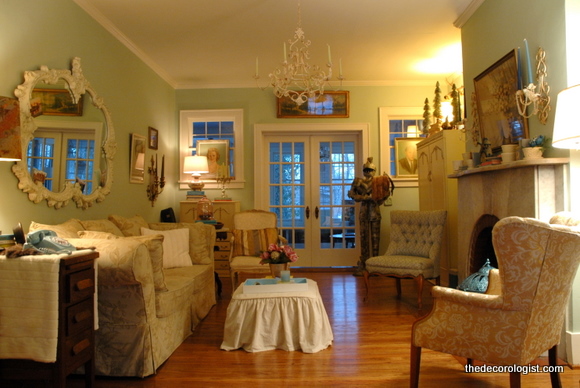 My new chandie is larger and would look better in this room, and it would totally be in keeping with the period style of my house.  But, alas, still no wires in this ceiling!  Two years ago, we had some work done in this room which included some ceiling repairs and repainting the ceiling here.  Now I am KICKING MYSELF that I didn’t have wires run up there!  I guess hindsight is 20/20, huh?

My only other option is to remove my bedroom chandelier and replace it with the new one.  But I like this one fine, and I really want the new one in the living room!   There is no place to put another large chandelier in my house – believe me.  And my oldest daughter said, “Don’t you DARE put that in my room.” 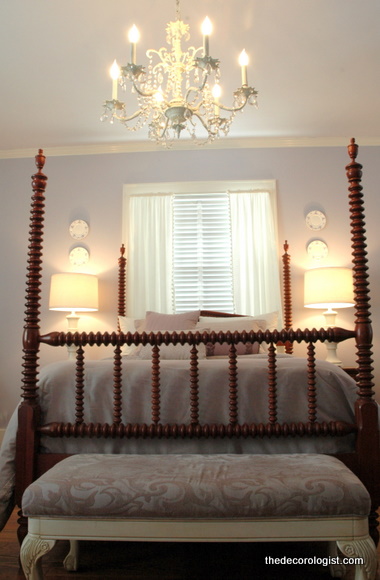 ← I'd Give My Eye Teeth for a Space Like This . . . A Valentine's Tree? Why Not? →
Subscribe
Login
16 Comments
Oldest
Newest Most Voted
Inline Feedbacks
View all comments

go for the wiring in the living room….

I agree – you’ll never regret it!

dianne – do you know how much that might cost?

I wouldn’t change the one in living room, not because it has no lights, but wouldn’t them be identical to the dining room one if you change it? this one looks good to me. For the wiring, yes, it should be done no matter you change it or not. I heard it’s not that expensive and will permanently solve all your future problem

they are similar, joy – but not identical. yeah, i could really use another light source in that room.

you mention in your earlier chandelier post about wishing you could do two in your dining room like you have on your sleeping porch – might this one work there?

hmmmm, i would definitely love that – but it would require patching the current hole in the middle of the room and putting in two more. mr. man would be THRILLED 😉

I love your new chandelier. I agree, you should wire the living room.

Ah, she is indeed a beauty! Love the owls, that is such a playful touch. Being a local music city lady, I understand just how high the wiring price tag may be. Still, it would be worth it.

Problem solved . . . It would be perfect in my office!

I REALLY think it would look awesome in your family room. I think you should suck it up and get it wired…I don’t think you would regret it…the light source would look so beautiful!

you are so right, c. now to talk phil into figuring out how to fish that wire through plaster walls …

I have the perfect solution – I’ll take the old one from the dining room and put it in my new dning room. It is already wired! LOL Mr. Man is a miracle worker, he can do the wiring! Or you could just put it in your oldest daughter’s as punisment or something.

Curious People have to KNOW… What did you decide to do? I love Love LOVE that Chandelier and I think it would create such a statement to enter the house right into THAT! Do you think it will hang to low for the LV room? I love that your home is filled with so so many treasures with great stories! 🙂 See you…Leif

i love chandeliers too and now wondering if i can do one in my entry?? instead of a orb?