Decorating Around the Television

I’ve had several people ask me to write a post about decorating around the television.  It can definitely be a problem when you really don’t want the focal point of the room to be a soul-less tv set.  The most obvious solution is mounting a flatscreen above the fireplace so that both the focal points are both addressed as one.  But it seems like that might be an uncomfortably high position for television viewing.  And it just seems wrong to me, like an insult to the fireplace’s architecture. 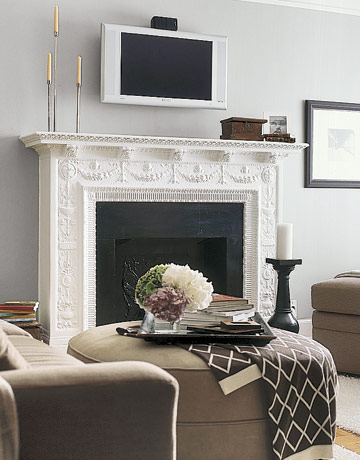 Another solution is to hide the television with a piece of art that can be slid to the side, like the one in this photo, when you want to watch the tube. 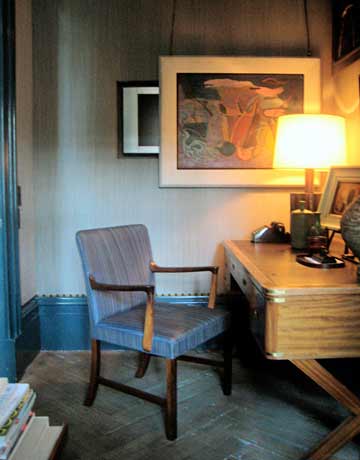 The owners of this home decided that TWO televisions, one on either side of the fireplace, was the best way to balance the tv dilemma.  Plus, a sports fan can keep an eye on the big game while others are watching a sitcom.  Hey, at least it’s symmetrical. 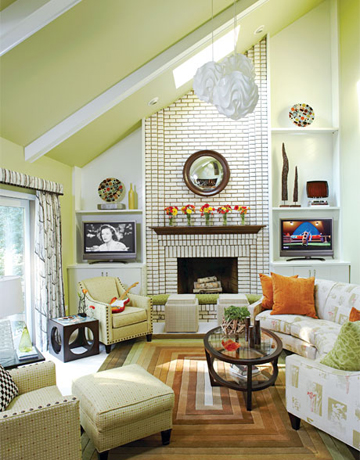 I like that the designer of this room didn’t do the expected:  hanging the flat screen directly above the fireplace.  Instead, it’s off to one side while another piece of art counterbalances it visually.  It’s the assymetrical solution. 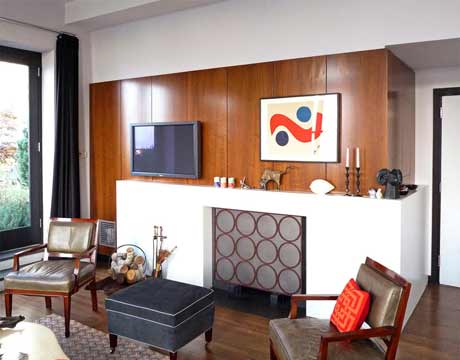 At the Belmont-Hillsboro Tour of Homes this year, I snapped a photo which addressed television placement in a room with a fireplace.  Here, they used a desk/console to the left of the fireplace so that seating could face both.  Although it could have been improved upon with the help of The Decorologist, the assymetrical accessories above the fireplace help to distract from the television. 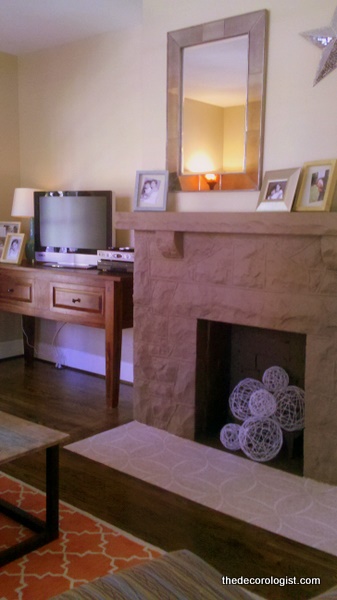 By mounting the television on this easel, the homeowners can position and reposition the television depending on where they want to be while viewing it.  It is rather large, but I suppose you could roll it right out of the room when you are entertaining. 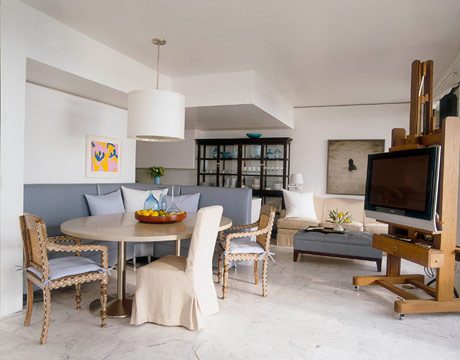 This undermounted television is barely noticable in this kitchen.  It doesn’t look out of place because of the use of art and a mirror in unexpected places. 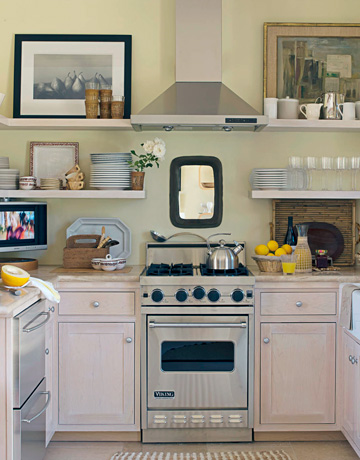 In this photo, the television is treated as sculpture and sits on a high and unexpectedly small platform.  Not my favorite option . . . 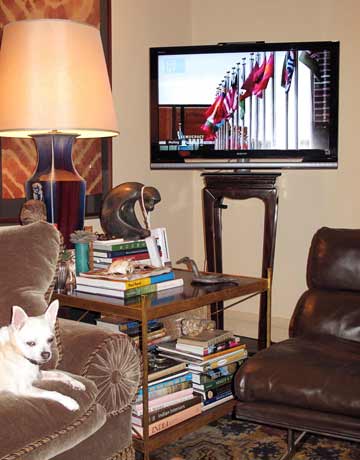 I’m still a fan of the television armoire, provided you have an interesting and unique piece.  Of course, armoires were popular for hiding televisions when they were more boxy.  With the advent of flat screens, it seems people want to show them off – although I’m not sure the point of doing so.  The new flat screens still fit nicely in armoires! 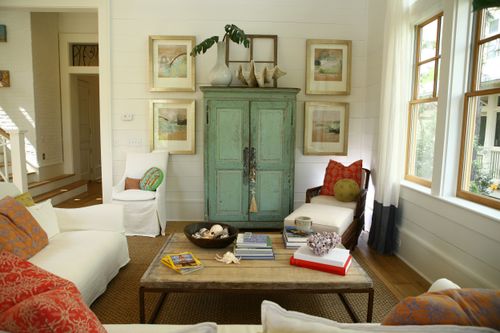 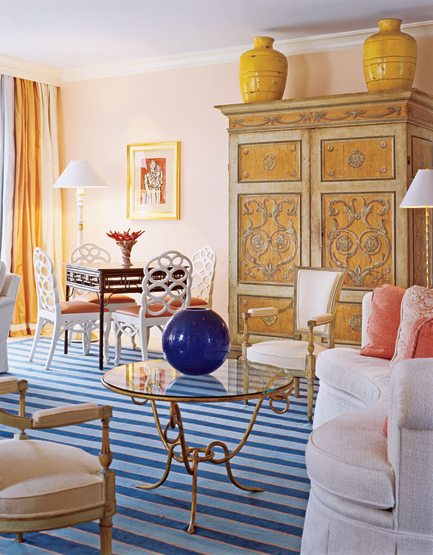 This is the flatscreen version of the traditional entertainment center.   An alternative would be to integrate a flat screen into a library wall.  At least it’s not ALL about the television in this scenario – books are entertaining, too! 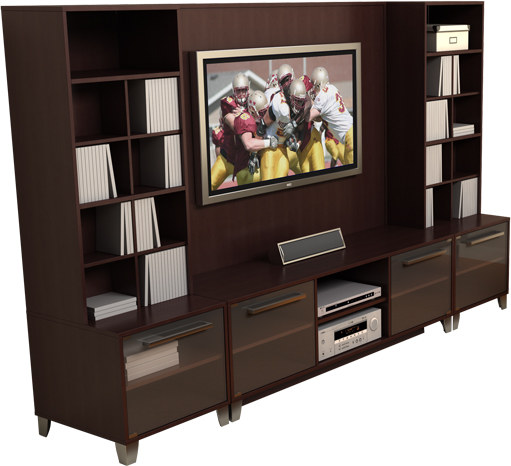 I think the search for a flat-screen television console is the perfect opportunity to recycle retro furniture.  Why not use that old retro stereo cabinet in your parents’ attic?   They are often long, low, and fairly shallow – perfect for a flat screen console.  If the furniture piece is hideous or worn out, a fresh coat of colorful paint can do wonders! 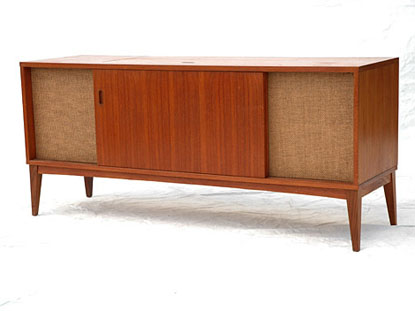 Now, THIS I like.  The flatscreen is part of a salon grouping of black and white art and frames.  It blends in amazingly well, even though there is no attempt to really hide it.  The low console below grounds the grouping, but I am left to wonder:  where are the wires? 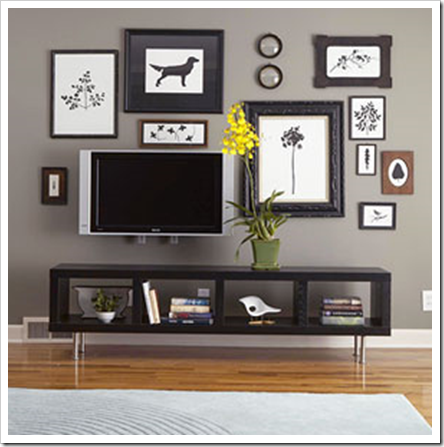 What have you done to solve the problem of decorating around the television in your home?

← Are You Listening to Your Chairs? A Doll Birthday Party →
Subscribe
Login
24 Comments
Oldest
Newest Most Voted
Inline Feedbacks
View all comments

great post….I grew up in the ’50’s when the televisions were big pieces of furniture. we “decorated” it with fake flowers and photos and stuff on top…it was the focal point of the room…along with the big Hi Fi sereo console. these were important pieces of furniture…how times have changed…for the better

I have seen the last photo before — and I, too, really like that idea. I do not think I ever seen a tv over a fireplace that I thought looked nice. Yuck.

Dear Husband says the electronics need to breathe/have room for air to circulate — so he is always against having equipment enclosed. (I, of course, want the lovelies to breathe, but I don’t want to see it. Sigh.) So, tell me about your former porch/tv solution in your home….Did Phil design it? Can you open the doors to let the equipment breathe?

Andrea – We designed it together and, since I live with The Decorologist, the “lovelies” don’t get much breathe time. The doors do open. Maybe the Mrs. will post a pic. Mr. R-Bear has more invested in his “lovelies” than I do, though

I’m probably one who has asked how to decorate around the TV. We are big fans of TV. I really like the last one – the TV mounted with all sorts of pictures, etc around it. This is a possibility for us at the new house. Thanks for the ideas!

Also, I don’t think I HAVE ever seen someone use such poor grammar…Oooooops.

I, too, remember the days of giant floor tv consoles – big pieces of furniture!
re: the kitchen tv photo – that whole picture is so impractical, it bugs me when magazines do stuff like that – won’t ever work in real life! Those dishes and that mirror right next to the stove – the first time anyone cooks a pan of bacon, or stir fried veggies every last piece will be covered in grease!

A sure sign that nobody actually cooks in that kitchen! They just like to check their hair when they go to get their guest a water refill. They probably live in NY and do a lot of chinese take-out . . .

Love this! I have an issue with this. Our downstairs tv is in our bedroom. I would really like to get it out and put it in our Great Room. I have no idea where to put it though because I don’t want it over the fireplace. Again … I need your help! 🙂

I am really amused by the TV on the pedestal. Apparently, the owners trust that the suspicious looking dog on the couch will not knock it over. And, apparently, they do not have children!

Alicia,
You are correct! That photo is actually of an older designer’s apartment with no children. 🙂

I’m so thankful for the helpful post. Trying to find a functional location for the TV has got us stumped!! It’s a small room with 1 fireplace, 2 doors, 2 windows, and 2 heating vents to work around.

I like many of the designs on this post — but I see a really big problem. None of the seating arrangements allow for actual comforable TV viewing!! A person sitting on most of the chairs or couches would have to watch the TV with their heads crooked. Or perhaps that is the goal; to make TV viewing so painful the decorator can remove the TV entirely?? :-D.

We’ve had arrangmenents similar to some here (though not nearly so lovely!!) and it just doesn’t work. Ultimately kids (and adults) end up sitting on the floor facing the TV or on the “arms” of the couches to be facing the TV.

In regards to the last photo: It’s actually really easy to run wires in the wall for the t.v. We did that in our living room and have ours on the wall. My dear husband even built me a frame for it (he drilled a tiny hole so the remote will still work. When we have company I will slip a print into the frame over the television or we have a very slow slide show of pictures that we will play (we usually do that one if it’s family visiting).

Great blog. I just came across it and I’m loving everything you write!

I am in the process of “re-imagining” some of our spaces (yes, it’s a very thinkerly process!) and have been spending quite a few thought-cycles stewing over our TV and assorted electronics, so I came and searched for this post that I remembered seeing before. Interestingly, some of the “TV solutions” pictured above address the TV alone…where is the cable/DVR box? The DVD and streaming movie players? The Wii? The PS3? What are all those lonely TV’s doing, anyway? ;^)

Yeah, that’s what I’m wondering. I think there are some cutting-edge tvs with cable box/dvr integrated, but obviously those boxes and wires for gaming would be problematic!

PS: Other than the issue above, I’m kind of grooving on the easel solution!

The TV is going to become just another piece in the Salon Style hanging. The armoire doors would not clear the bed frame when open. I mounted the TV on the wall. I will surround it with art.

In the last photo, you don’t see wires simply because all outlets and cable connections run right into the wall behind the TV! My husband is an electrician and used to install cable; this request has been made of him many times. In general it is not too complicated nor very expensive. Older homes, however, can sometimes hold surprises in their walls. =)

I thought you might find my unique "decorating around the television" problems amusing. Not only did my husband find it necessary to buy the HUGEST flat screen we could afford, he mounted it in an awkward place in the living room, perfect for viewing from the toilet down the hall. Carol

This is so funny. My husband and I are in a battle about the TV. He believes fireplace mantles were created to hold a TV on them. HA! I am definitely the decorator in our house and I have this lovely brick fireplace that I painted white with an antique white mantle that I LOVE but since a marriage is about compromise, I unfortunately have a GIANT black TV that takes up almost the entire mantle. Sigh. Now he wants an even bigger TV and I told him that it would NOT go on the mantle if it got any bigger. I need some decorating space! lol I know it would do very well on the low piece we have to the right of the mantle that holds the rest of the TV equipment but that is something he just can’t live with. Oh well, such is life! 🙂

Kristie, an update on the TV down the hall from the toilet. Of course that was unacceptable. So I bought a smaller TV and tried to incorporate it into my salon style wall of paintings. He didn’t like it, and it didn’t work for me either. The big TV went upstairs, but nobody wanted to be banished. Then, the unthinkable happened. Our house burned down. All people and pets are fine, but the house and TVs are toast. So now we are 2 months out, and are regrouping, and I found a beautiful deep red Chinoiserie TV armoire similar to the style of the gold one you have pictured above, but not so tall or deep, with bifold doors, and plenty big enough to hold a HUGE TV. That, as Sheri and Matt would say, is going to be my inspiration piece, the whole living room will be decorated around IT.

Thanks for wonderful idea. The living room looks much better with these style. 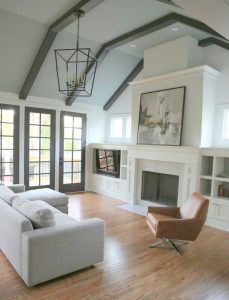 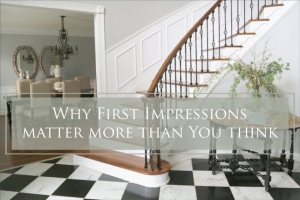 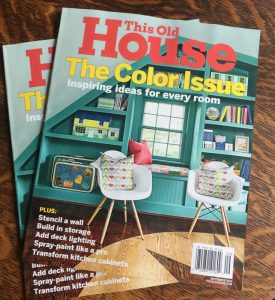