I’m giving you a peek inside the new farmhouse I showed you earlier this week.  It’s a new build and about to go on the market, so it’s not furnished at this point. I did a complete interior and exterior paint color and design consultation on this home a couple of months ago, and I got to take a look at the progress just last week. 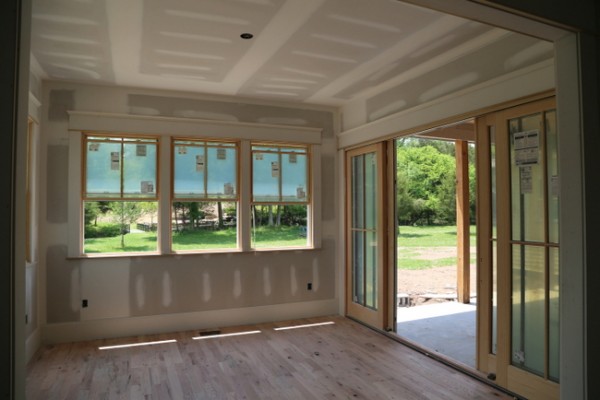 The above photo is a “before” of the breakfast room.  The builder was considering wood beams on the ceiling.  I recommended a light gray wall, warm white trim, and almost black on the windows and interior doors.

Here’s the same area after: 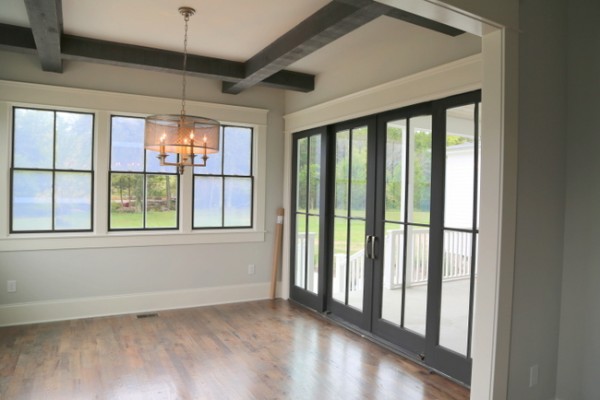 The wood beams were stained in ebony, and the look is more upscale and contemporary than if a predictable brown stain had been applied. Here is where the kitchen started: 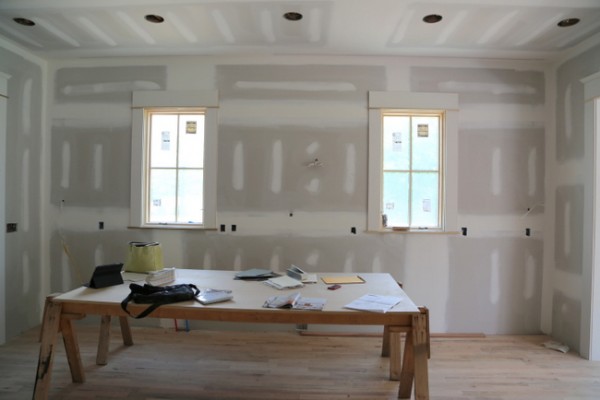 Didn’t look like much, but wait until you see it now!  Working off the idea of a “white kitchen” and the quartz countertop my client had chosen, this is the result: 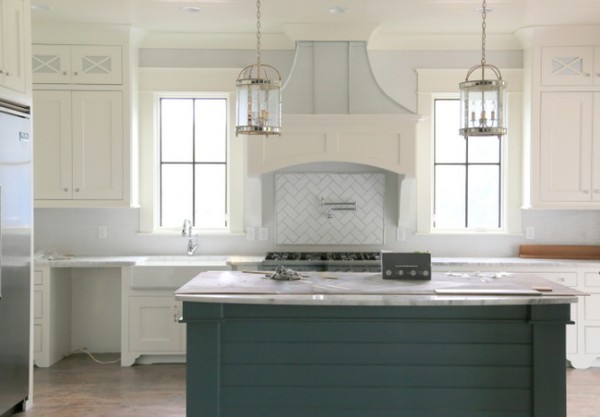 Painting the island in a dramatic, on-trend color gives it personality.  And it’s not as permanent as cabinets painted a dark color  (which is not really permanent, of course), if the new homeowner wants to change the color in 5-10 years.

The light gray walls play nicely with the penny tile backsplash and the grey metal you see on the stove hood, and the black “eyeliner” on the windows is perfection. 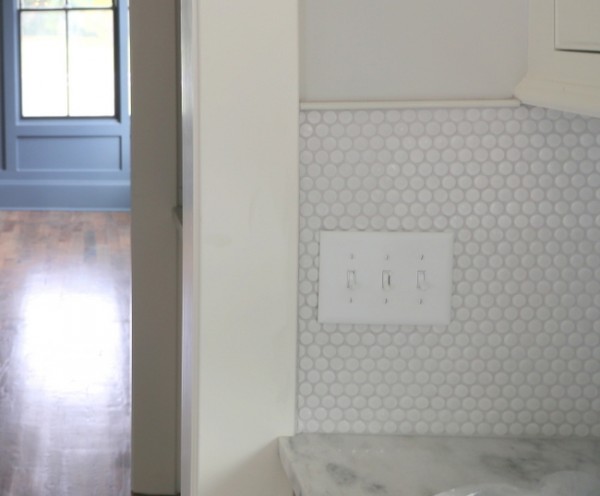 The kitchen is open to a great room.  I advised on all things requiring color (floor, ceiling, walls, trim, accents) as well as the design of the bookcases.  Here is where that room started: 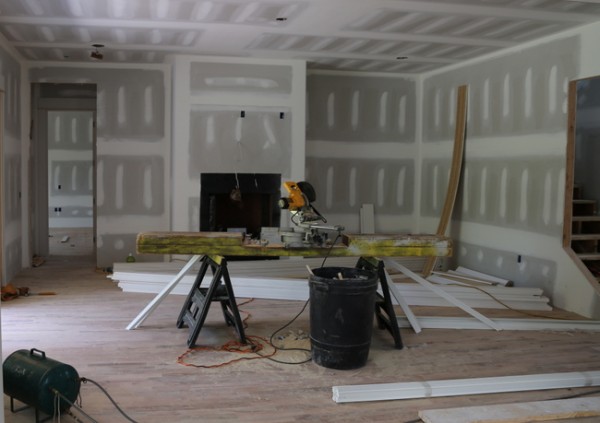 Excuse the boxes and other junk, but I think you’ll like the “after” of the space!  The back of the bookcases are the same color as the kitchen island, which is where this shot was taken from: 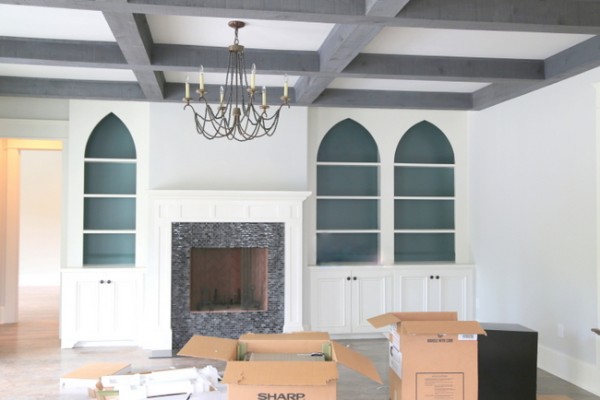 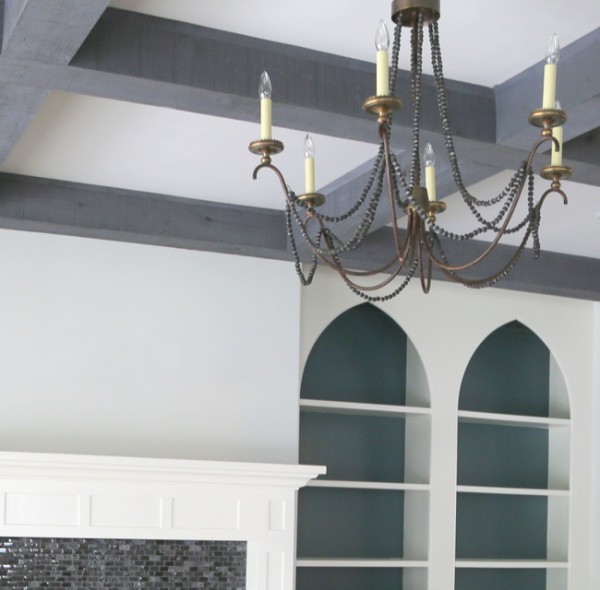 Here’s a ‘before” shot from the entry of the room, facing the back french doors: 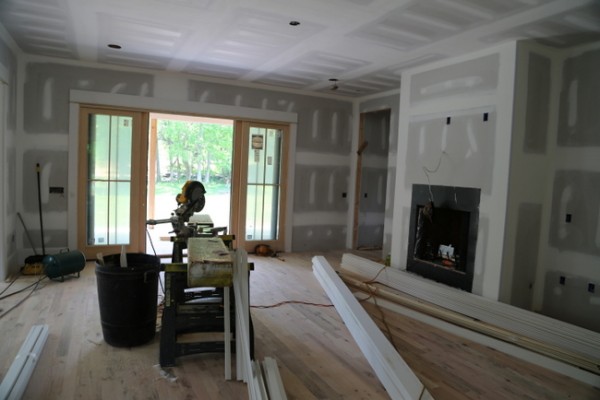 The view out the back of the house are amazing, and I knew that dark window mullions would draw your eye and frame that landscape beautifully.

Painting the interior doors, windows, and specific trim pieces almost black could have made this gothic farmhouse look dark and forboding. By keeping lots of white and a very light wall color in the main areas, the off-black grounds the space and gives it a subtle sophistication it wouldn’t have had were it all painted white. 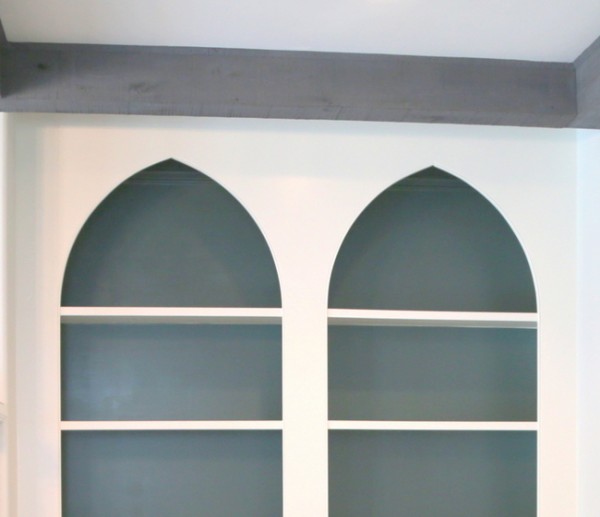 moody color in the back of the bookcases

And by using a dramatic color in the back of the bookcases and the kitchen island, this space has a personality it wouldn’t have it we had gone all white and black. 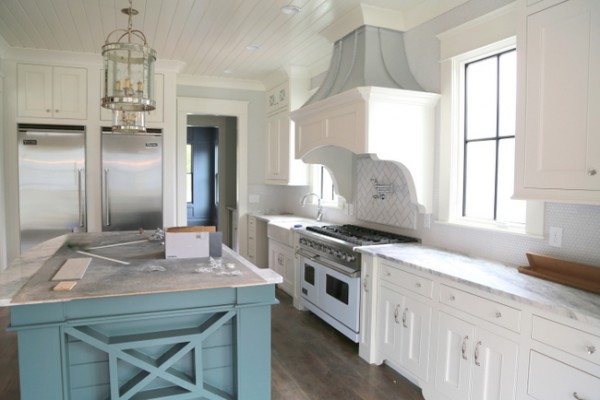 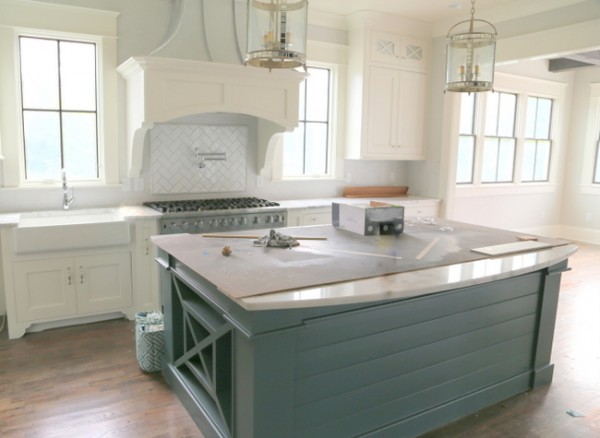 All the interior doors are now almost black – not just the french doors.  These aren’t even solid wood doors, but the dark color makes them look so impressive! 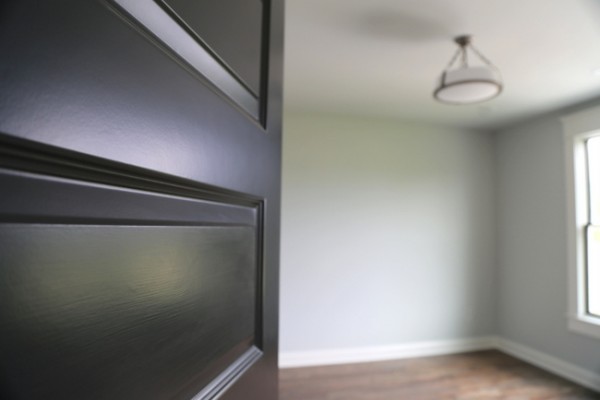 I hope you enjoyed these before and afters – I am really proud of this one!  I just did a completely different color palette for a neighboring new build last week, so hopefully you’ll get to see how much COLOR can make a difference in the way a home feels. What’s your favorite thing about this house?

Where is this house Kristie? It’s beautiful!

Can you email me the address? Must be on the east side of 65.

I love:
the color and trim work on the island in the kitchen!!!! it’s in the details!
White marble countertops!
Dark doors
Stainless trim on the island?
I know you had zero control over this but I wish the ceiling height was taller!
Love Love Love the house!

Gorgeous! I love the use of black and the color you used for the island and bookcases (it is similar to an accent color you suggested for my dining room, which turned out beautifully). I can’t imagine this home will be on the market for long. Too bad I don’t live in TN 😉

I’ve been dying to do off black on my new windows and french doors that look over my pond and garden.. this blog and the photos give me to courage to do it in spite of all of the negative responses I’ve received from friends when I ask their opinion. Thanks!

Don’t listen to those people – you should totally go for it!!!!

Kristie,
Thank you for your magic touch on another project! Jerry is so pleased with it and I know the future owners will be too!! He always comments,” Kristie… she knows what she is doing!!” We have gotten nothing but wonderful feedback from everyone that has previewed it!! Another winner!! Will be getting photos to list in the next week… check out his facebook page http://www.facebook.com/kolecustomhomebuilders for the upcoming photos on this project and message us there for more info!! Thanks again Kristie!!

Beautiful!! I love the beams and all of it! I still like my black interior doors, I agree it makes the doors look nicer than they are. At least in my home. The island color is pretty too! You always do such a fabulous job!

Love it! I just consulted on a similar rebuild with a pool and ocean view. Unfortunately they had already done the fireplace, exterior stone, windows & granite before they brought me in, so we had some work to do to pull everything together. But I admit that I never considered black windows. That may have worked well. I was able to get the kitchen cabinet color changed today so that we won’t have red mahogany wood next to yellow/grey fireplace stone.

The good news is that I’m helping on another house and getting in a little sooner.

Absolutely gorgeous! Love it all!

Kristie I Love it! I am in the process of redoing my kitchen . Going to do white cabinets , my problem is kitchen has a soffit any tips on what do with it . Besides ripping it out ? Or should I just get rid of it ? THANKS ! Your work is amazing .

You could just paint it out white, as well – it will make your cabinets appear taller. Painting it “wall color” will keep your cabinets looking stubby. Good luck!!!

Thanks !! I appreciate your advice I think I will do that .

[…] lots of ways to enhance your architecture with a black paint color. Check out my posts about black doors, as well as other things you may want to paint […]

Do you give out the beyond-black color or the azure–? Thank you!

Could you please tell me the paint color of the kitchen island? Beautiful!