You probably know I went to the Bella Rustica Vintage Barnsale the weekend before last and had a wonderful time scouring the humongous barn for vintage and handmade treasures. What you may not know is that the sale was held on the property of Milky Way Farms, founded in the 1930’s by Mars candy mogul, Frank Mars. 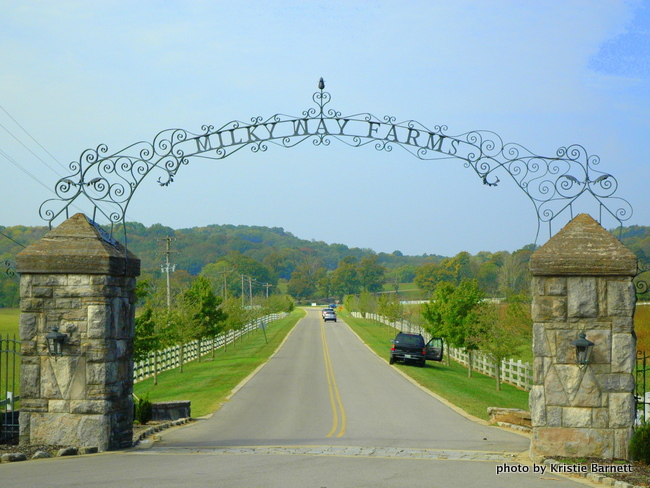 For an old house junkie like me, the best part of the day was touring the amazing tudor revival-style Milky Way Manor.  Located about an hour outside of Nashville, Milky Way Manor is more than worth the trip. 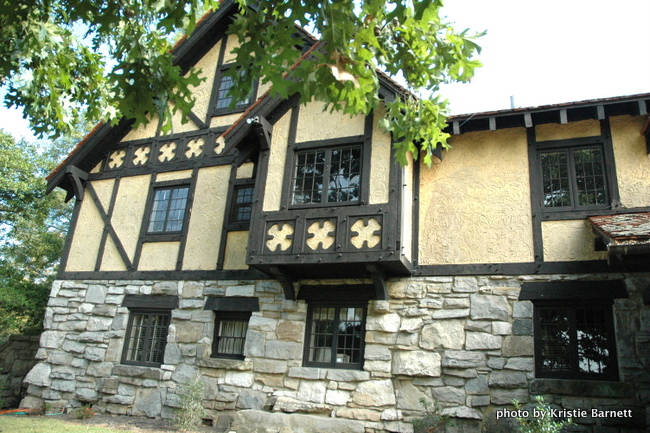 First of all, Tudor Revival is one of my favorite architectural styles because of the storybook charm and coziness it provides.  Huckle Cat could totally live here, right? 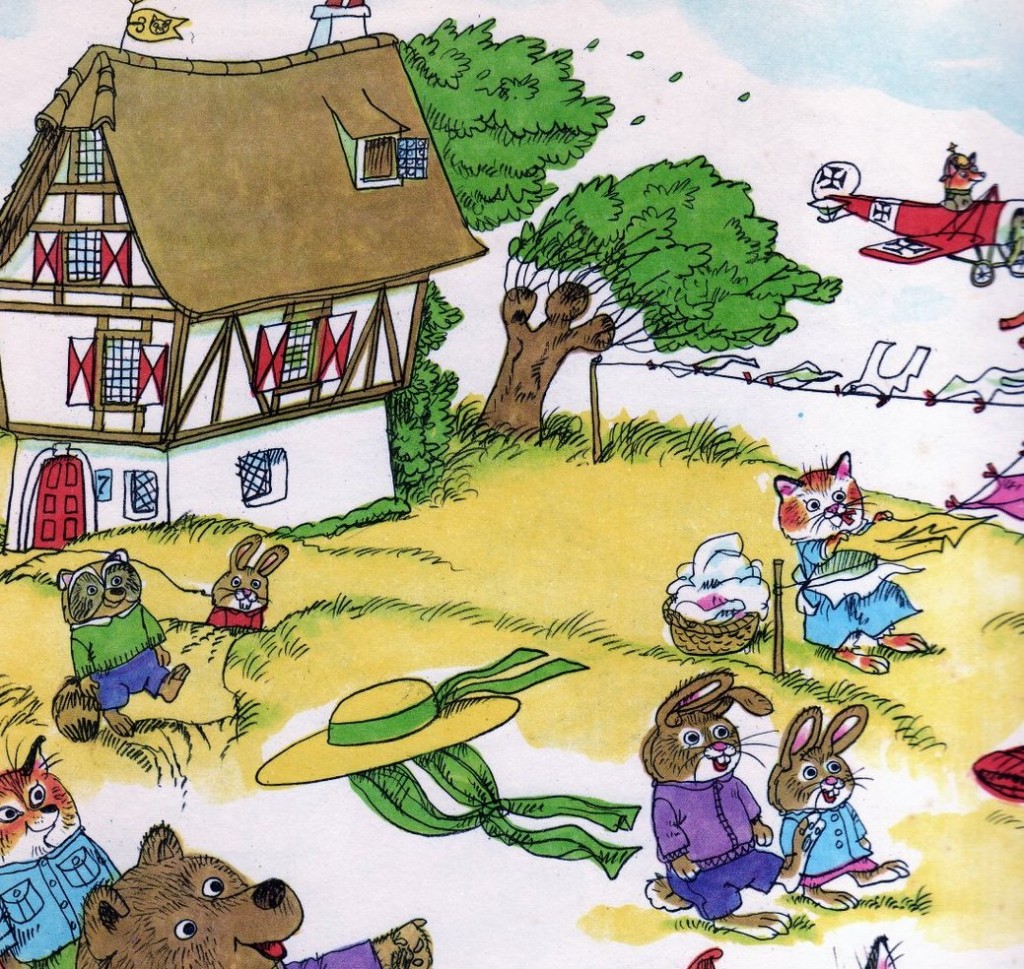 But I digress.  Stone and half-timbering grace this amazing 25,000 square foot home built in the early 1930s on Frank Mars’ 2,800 acre estate.  Even though it’s the size of a small castle, Milky Way Manor is warm and inviting.  You can tell there’s been a lot of love and happiness in this place. 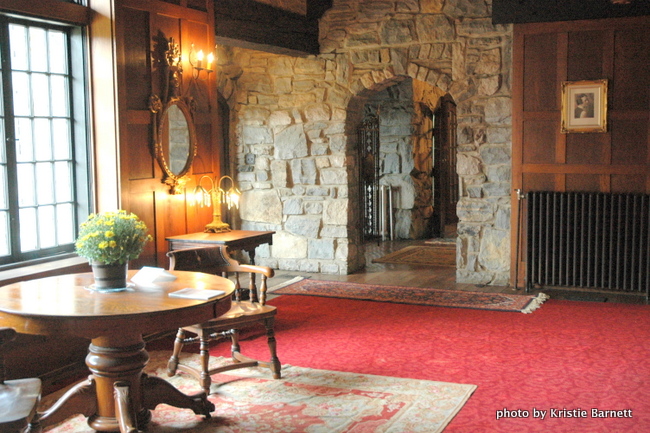 The house is centered around this Great Hall, with 4 hallways branching out from this room.  You can see the upstairs and downstairs hallways below, with bedrooms for family and close friends. 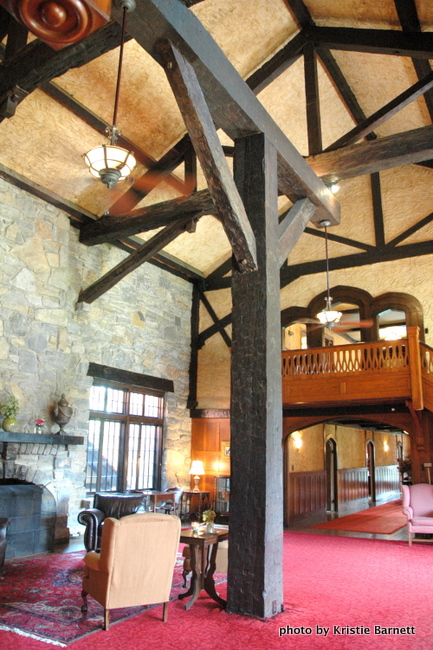 The opposite hallways lead to what were formerly servants and maid quarters.  Mr. Mars paid his staff so well that the neighboring business owners were initially up in arms – all the local workers wanted to work for Mars instead of the jobs they currently held! 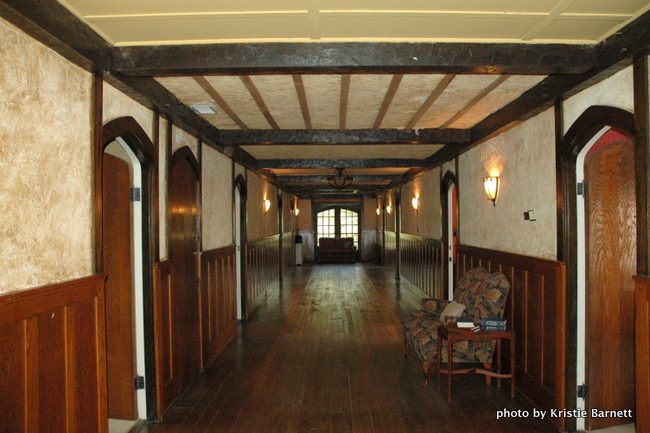 This was Frank Mars’ private bedroom.  His wife had a private suite, as well, across the hallway. 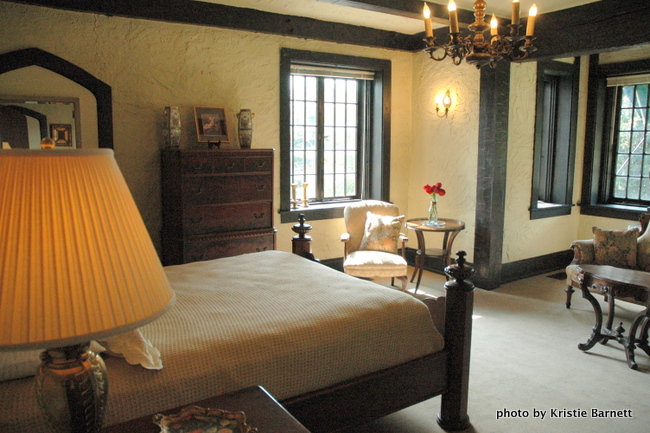 Their rooms share a romantic private porch at the end of this wing.  I imagine they spent time there in the evenings –  she, knitting a scarf and he, smoking a cigar . . .

There are a total of 25 bedrooms in the house, and this is one of my favorites: 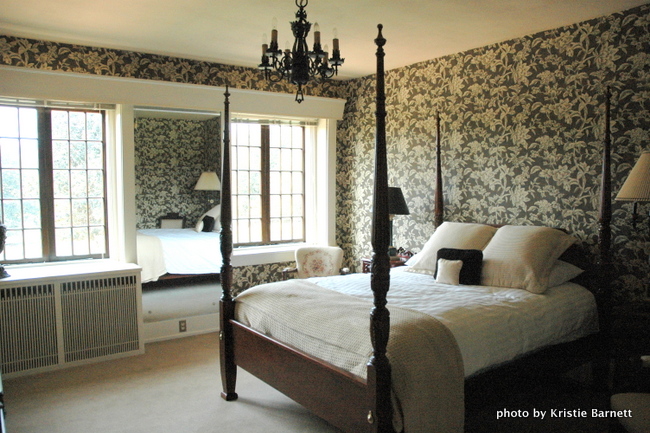 All of the bathrooms have an Art Deco flair. 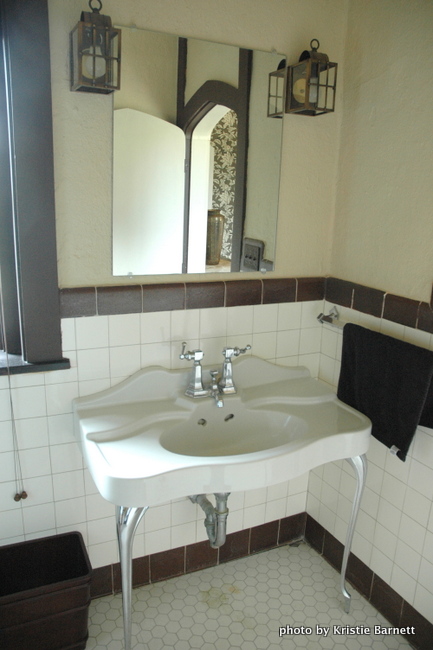 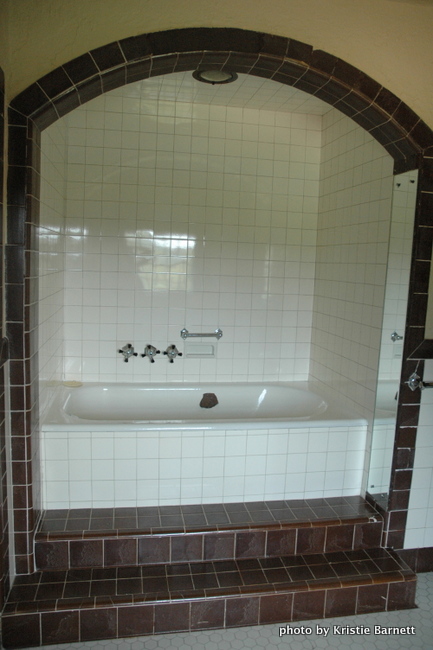 The dining room holds a table that seats 48 – it is the largest privately-owned dining table in the United States!  The Vanderbilts once tried to purchase it for The Biltmore in Asheville, North Carolina – but it was impossible to remove from Milky Way Manor. 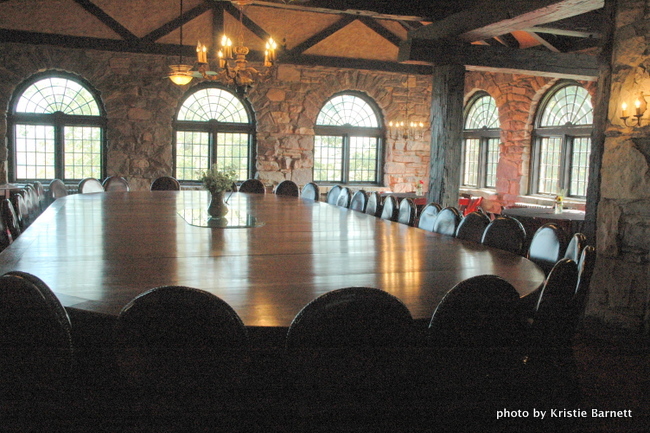 It was built on site and wasn’t made to be dismantled.  Can you imagine the feasts that were held in this room? 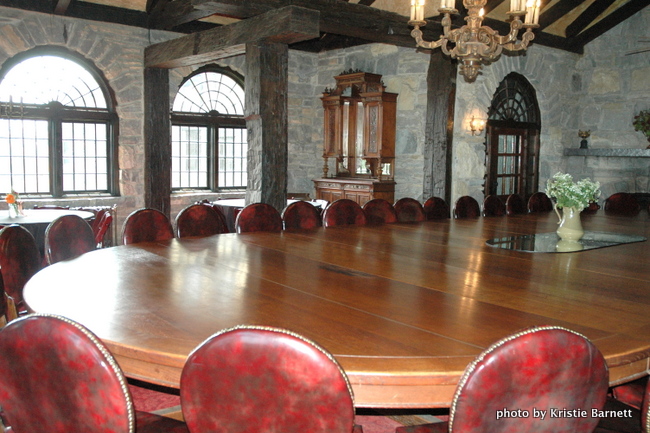 Milky Way Manor was recently purchased by the Charles Jones family and is available for wedding and corporate events, as well as manor tours.  Too bad I’m already married . . . 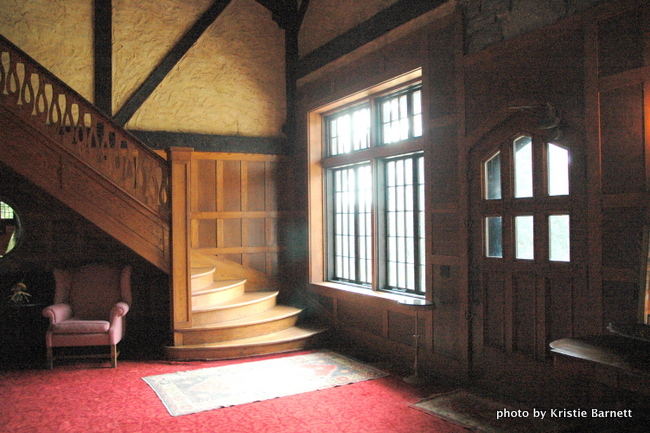 Wouldn’t this be a fabulous venue for a Master Design Workshop weekend with The Decorologist?  A girl can dream . . . 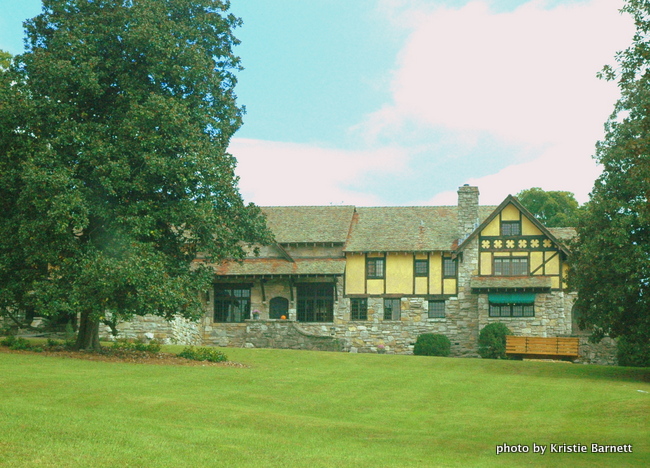 Spending a morning in this beautiful setting can certainly make you believe you’ve been transported to the English countryside in the 1930s.  Of course, spotting this on the ground just outside the gates of the farm harkened me back to reality. 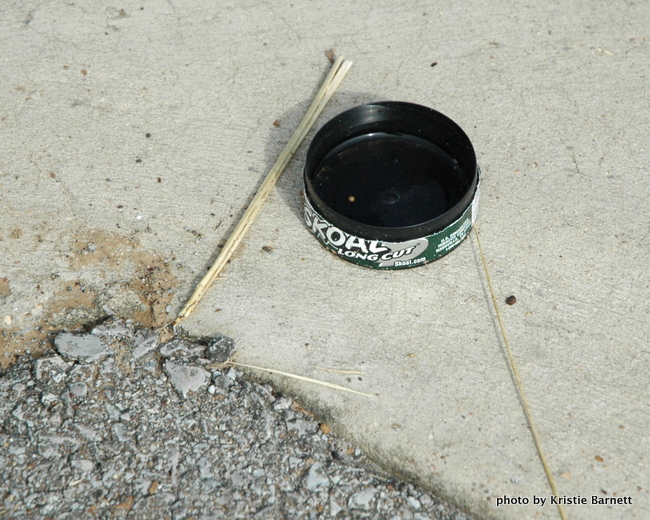 If you ever have a chance to check out this hidden jewel, I urge you to do so.  Milky Way Farms host a miriad of  events, trail riding, camping excursions, and photo/video shoots.   For more information, go to their website and their business page on Facebook.  Tell them The Decorologist sent you!

thanks so much for posting this. even though I went to Bella Rustica, I was not able to tour the mansion. it is lovely… it would be a great venue for events! I love that Mr. Mars and wife had their own suite!

I wish you could have toured it, Dianne! Maybe you’ll have another occasion to get out there.

Having eaten quite a few Milky Ways over the last few years I was so surprised to find the property and the manor both named in that way! Just funny I think, to have a property named after chocolate bars…but then with a name like Mars…thanks for the look.

Carol,
I also learned that Snickers candy bar was named after one of Frank Mars’ favorite horses!

This is gorgeous Kristie! Anyplace that is named Milky Way is ok in my book. I’d like to share this link on a forum where I just happen to be talking about castle color yesterday – with your permission of course. I was talking about a client of mine that wanted Castle color last minute and I had to pull a palette out of my hat. After looking at your post, my palette is perfect! You don’t know how much I needed to see this! You are a lifesaver! I’ll wait for your reply to see if I can share… Read more »

Of course you can, Donna! Can’t wait to read your post 🙂

Enjoyed the tour. Just a comment. Biltmore house dining table can seat 64, which is definitely more than the 48 at this home. Vanderbilt may have wanted the table, but he sure had a very grand one made! The dining room and library are my favorite rooms at the Biltmore. Despite the size and length of the table, the dining room acoustics allow that a person speaking at one end of the table can be heard at the other end. Perhaps largest is referring to square footage, and not seating capacity? That part of TN is lovely!

Charisse,
It may be that it was the largest privately-owned dining tables at the time it was built – I’m not sure when the Biltmore table you refer to was built. I was so busy taking photos, I may have not been as focused as I could have been on the details of what the tour guide said! I’ll check on that when I get a chance, thanks!

That home IS so much like a story book! I dream of having a series of small storybook cottages built here in our neighborhood and outfitting each one for vacationers! Yes indeed, a girl CAN dream! All’s we need is our Beloved & Beautiful King to return!!!

Dear Kristie,
It looks like the place could use a color update! Any chance you’ll be the one for the job?!

Barbara,
So funny that you say that, I’ve been dreaming about that since I was there! And I would love to have some William Morris wallpaper installed in some of the other bedrooms I didn’t show here . . .

What an interesting post! I thoroughly enjoyed reading about Milky Way Farms. I am also dying to have the right project for William Morris fabrics or paper, or both! I am obsessed with the genius of William Morris.

Maybe one of your girls could get married there!

Kristie, I commented earlier–it disappeared!! This is a delightful post! I love this place–if ever I get to come to one of your seminars in Nashville, I am going to try & visit this enchanting place!
I too dream of having some small cottages built on our land here just in that fashion for vacationers! Just need to sell some other pieces to afford to build them!! “Some day my Prince will come….”

loved those half-timbered ceilings! and that beautiful pedestal table in the picture after Huckle Cat! (Love Richard Scarry too – we went through TWO hardback copies of Cars and Trucks and Things That Go with my son before he finally outgrew it – which was sad! )

Kristie, Thanks so much for coming out to MilkyWay Farms. We appreciate so much your photos and comments about the property. My father and I fell in love with this little piece of Tennessee history and look forward to slowly restoring it. We are so glad you enjoyed your visit. We are currently hosting weddings, corporate meetings, and events in the manor, barns, and scenic overlooks. I may be wrong, but I was told that one of the previous owners was selling the table to Opryland but they could not get it out of the Manor house without ruining it.… Read more »

That Skoal cracked me up.