I just spent a couple of days at the rural farmstead of my children’s school director. It forced me to disconnect a bit, which is why I always volunteer to chaperone when she invites students to her farm. 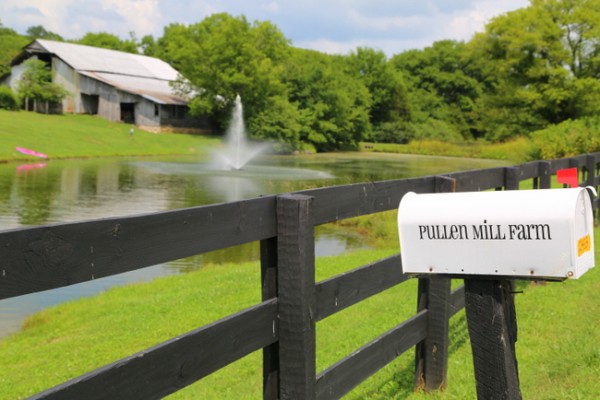 That and the fact that her home is a fantastic historic treasure – a combined 1900 farmhouse connected to a much older log home. 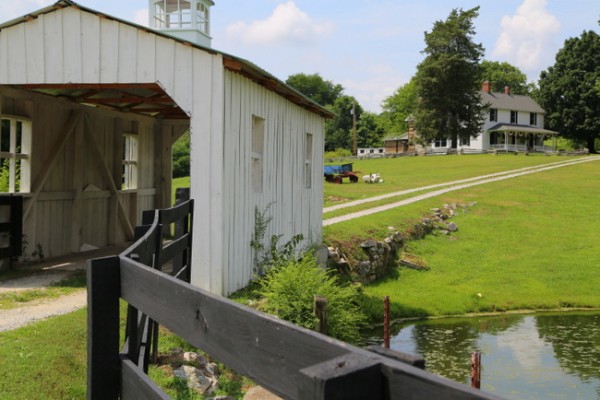 The original log home was built by a soldier from the Revolutionary War on the land gifted to him for his service. 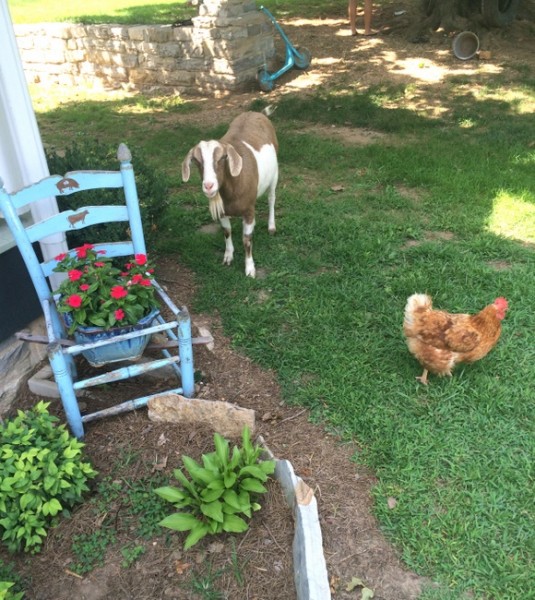 This was my fifth trip to Pullen Farm, and this time I scored my own room. I slept with the windows open and was awakened by a rooster’s crow instead of an alarm clock.  Below was the view from one of the windows in my bedroom. 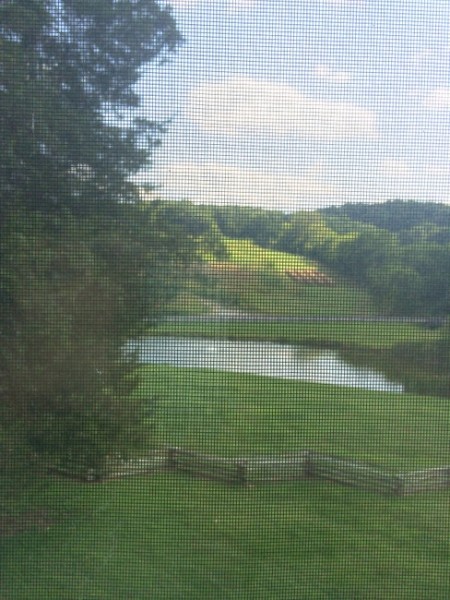 We always go berry picking when we visit the farm. Blackberries and blueberries are in season! 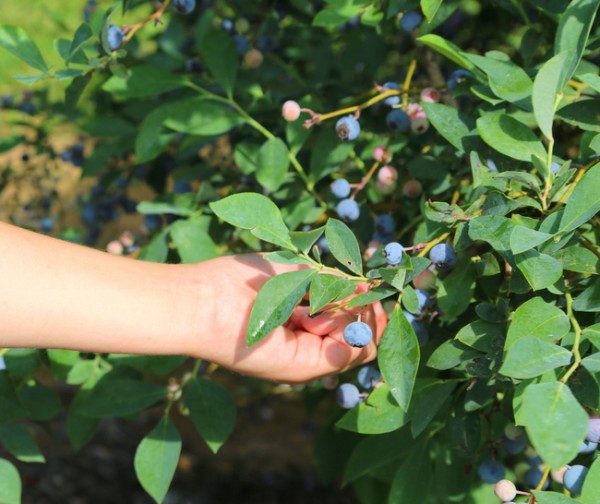 While the children were picking berries, I snuck away to an estate sale (gasp!) that I spied nearby. I had to take a photo of the road name. Did I mention this is rural Tennessee? 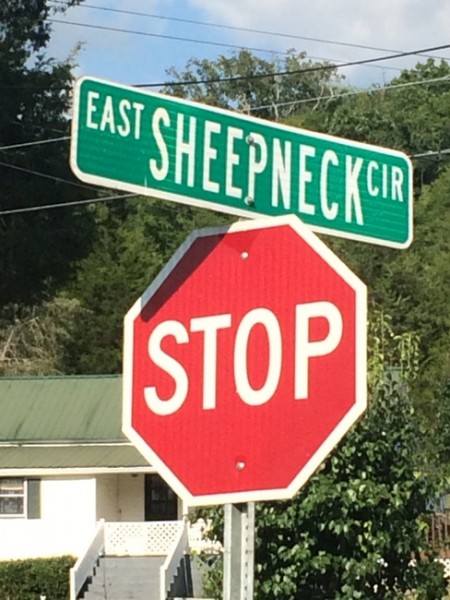 I apprehensively drove up the steep, curvy drive. I could not believe what I saw when I reached the top. 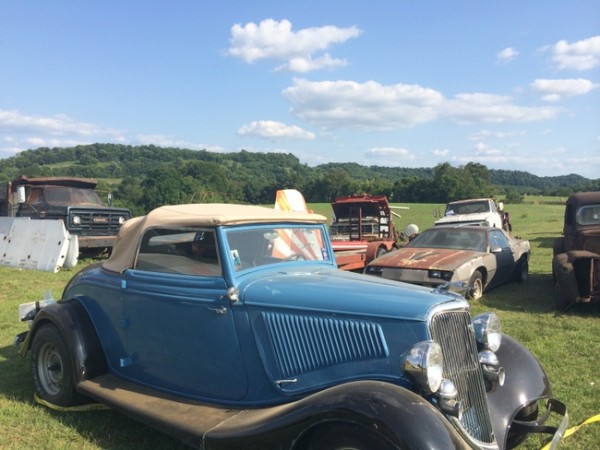 If you could collect it, this estate sale had it. Vintage cars and planes were only a fraction of a life full of collecting – the interior of the home was chocked full of vintage glassware, cookie jars, antique furniture, etc.  I only took pictures of the most impressive items! 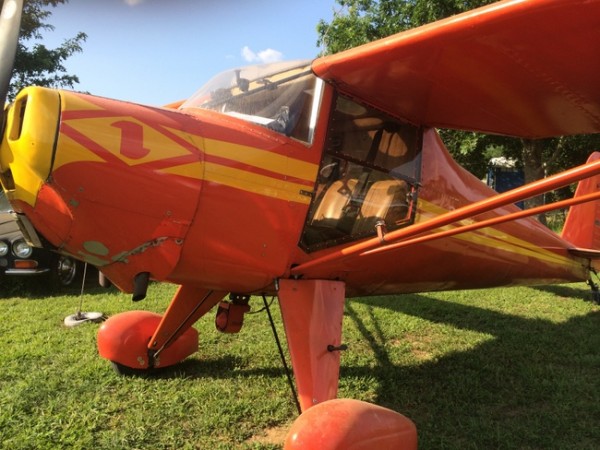 I saw something very similar, but in nowhere near the condition of this vintage fuel pump on American Pickers just last night: 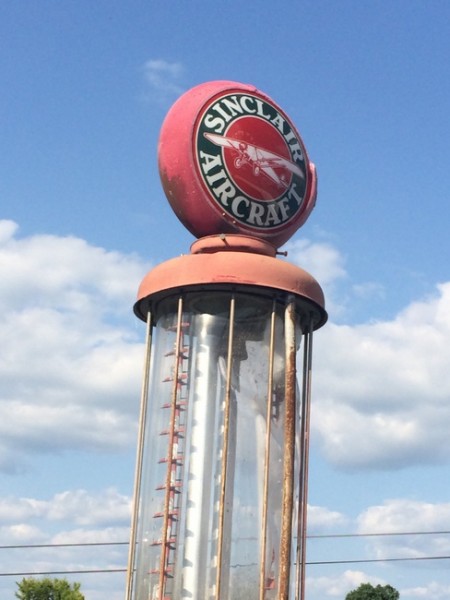 I thought sure I might see Mike Wolfe around any corner – he does live right outside of Nashville.  Anyway, I picked up a few treasures for myself – a pair of vintage genie lamps and a freaky little gnome. 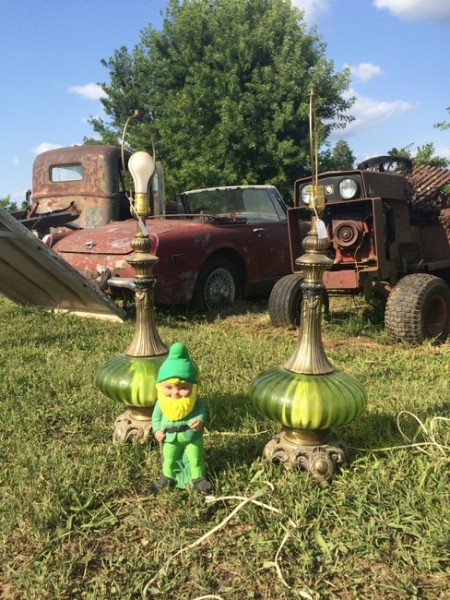 After hitting this estate sale, I drove around for awhile on the back roads of town.  Whenever I’m away from home, I always imagine what it might be like to live somewhere else.  There were so many abandoned houses, which have always been fascinating to me. 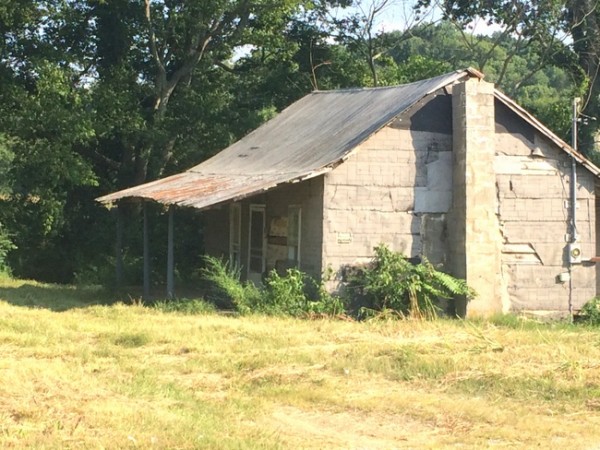 I always wonder – what happened to the owners?  Did they just take off?  Die?  Is the house beyond restoration, or does it still have a chance?  So many questions. 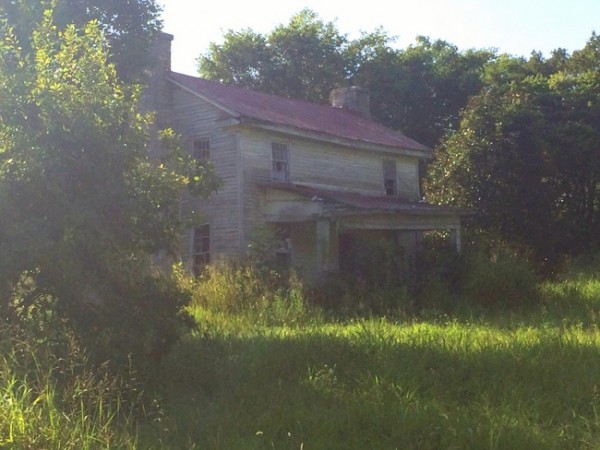 After my solo excursion, I returned to the farm to eat a home-cooked meal and watch the kids make pies from the berries they had picked.  They divided into teams, and I got to help judge the four resulting pies. 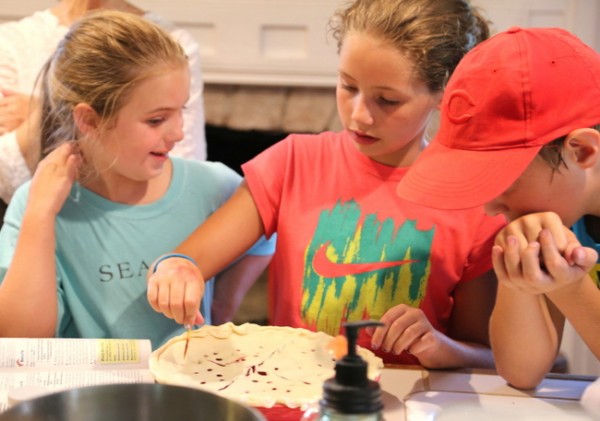 Two of the pies were pretty much inedible, but the other two were not too shabby.  The next day, we had lunch in the neighboring town at the Soda Pop Junction.  The restaurant has tons of history and operates out of a building erected in 1860.  Who else wants an old-fashioned milkshake? 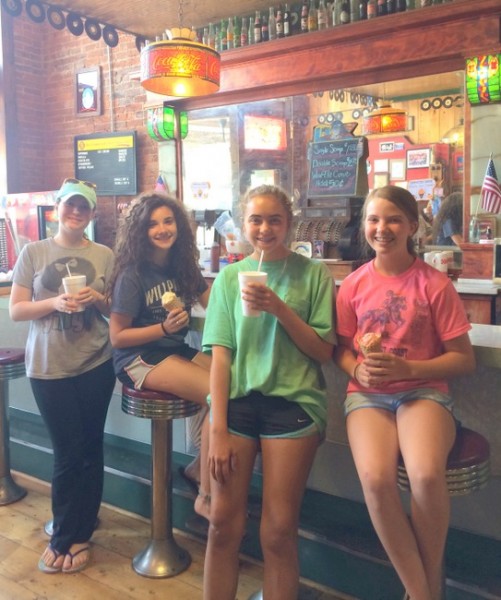 If I wasn’t such a grown-up, I would have totally tried to ride this awesome vintage carousel. 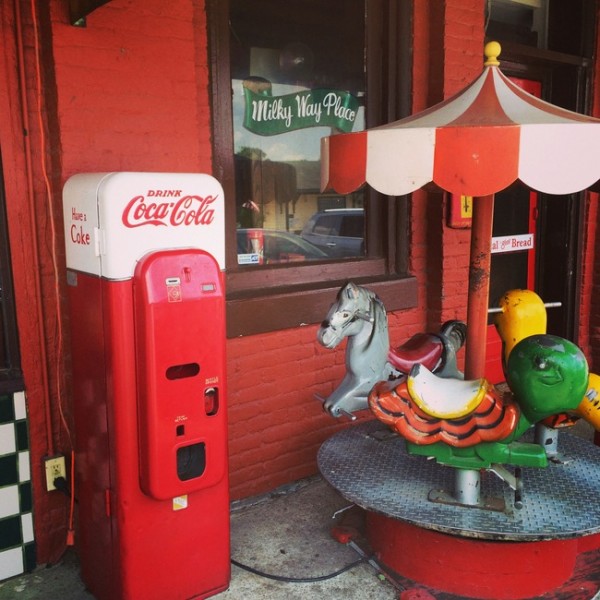 The kids made some great memories.  And I didn’t even tell you about the prank where the girls put a big chicken in one of the boy’s beds in the middle of the night.  And that was the school director’s idea!  Wish I had a photo of that . . .

PS: I love the photo through the screen….. Looks like intentional artwork!

I love that, too, Paula! Unfortunately, your first comment and my response have been deleted – something is wrong with my site and the blogpost went all screwy.

Probably ’cause I mentioned God….!

Oh dear, I certainly hope not!!

Love it! And I managed to score the leftover blackberries… made myself a yummy pie from my grandmother’s recipe!!

I have had more blackberries in the last week than I’ve had in the last couple of years!!!

What an amazing area to visit. I need to make a trip.

Kristie, Love this adventure you we’re on.
My husband is very interested in the airplane that is in this article…can you give us any info on how to contact the estate by any chance? Thanks Kath

Kath,
The estate sale company is called Heritage Estate Sales – the home was on East Sheepneck Circle off Mooresville Road (I think) just outside of Culeoka, TN. About 8 minutes off I-65. Hope that helps you track it down!

Kristie, Thank you so much.

I can’t wait to see what you do with the vintage genie lamps! They’re such a pretty green.

Blackberry picking and then homemade pies! Great memories of my youth. Looks like a beautiful place to spend time making memories with your girls.

Love the lamps but definitely not the gnome!

I almost sent a photo of the gnome to your email, Lezlie!

I would be even more traumatized!

Like you, I have also had the same curiosity about old, abandoned homes. My grandparents lived in a very rural area down South and on our trips to see them, there were so many interesting old homes still standing – some barely. Some were as old as pre-Civil War and my grandparents knew all the people who’d lived in those homes, what happened to them and why the homes were left abandoned.

Thanks Kristie for sharing your vacations and adventures with us ! What a lovely school director to share her home with you and her students ! Also, what a great learning experience for the kids. The majority of Estate sales here are nothing like the one you went to. They are rather compact and boring. What a fun experience and a trip down memory lane to see all of those fun items for sale. I too always think of who lived in the homes and what their story was. Sometimes you get small inkling of the person that owned the… Read more »

that vintage coke machine at the end is great! I was trying to describe that same thing to my kids the other day. enjoyed all those photos from life in the country!

[…] Last weekend I spent a few days at our daughters’ school director’s farm about an hour outside of Nashville. This was probably my sixth visit, and it’s always a treat to spend time at Ms. Terry’s historic home. […]