I’ve consulted on many bathroom renovations this year, many of which include black subway tile as an important design element. Why black subway tile?  Here are some great reasons to choose it for your bathroom. 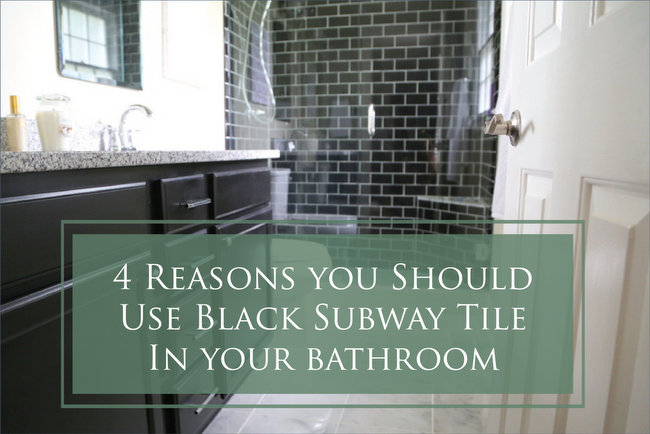 Reason #1: It’s a fresh take on the classic black and white bathroom.

Many of you will remember that my office manager, Allison, moved from the home we renovated last year (which sold in a couple of days, I might add!) into one closer to her children’s schools. And you may remember the befores and afters of the hall bathroom we renovated. Today I’m going to share what we did in her master bathroom. Here was the bathroom in its 1990s glory: 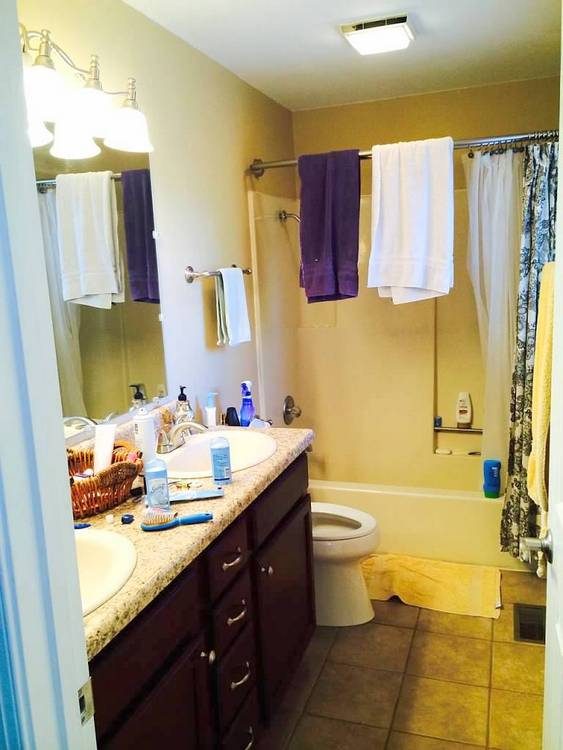 The shower/tub insert and the splotchy floor tile had to go. Allison wanted updated and timeless but was willing to try something somewhat different than what we chose for her hall bathroom. 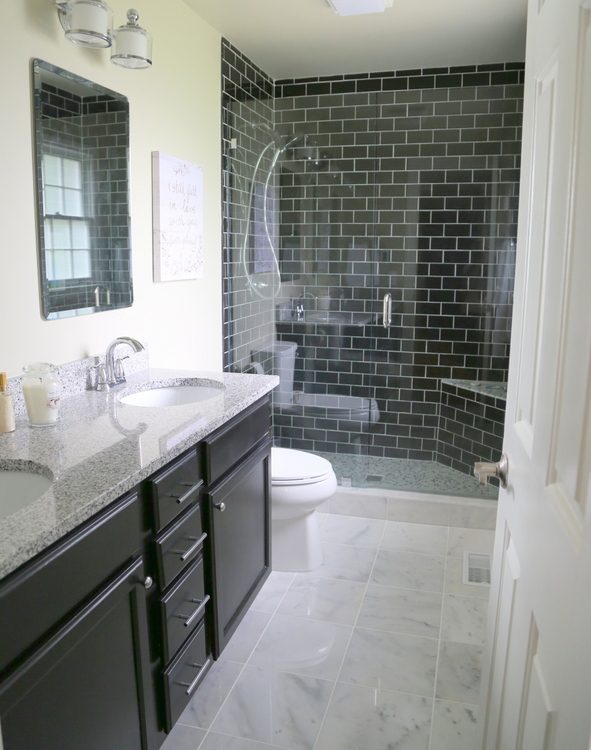 The new look is such a dramatic change but it also has a timeless beauty that isn’t likely to fade as quickly as its former rendition. And it looks so expensive, right?  That leads me to the next reason you should consider using black subway tile in your bathroom . . .

Reason #2: You’ll get a high-end look for a low-end price.

This high-end look started with the idea of black subway tile from Home Depot, at only $.25 a piece! We painted the dark cherry cabinets black to create better tie-in with the tile, which was another inexpensive upgrade. Here are the cabinets before: 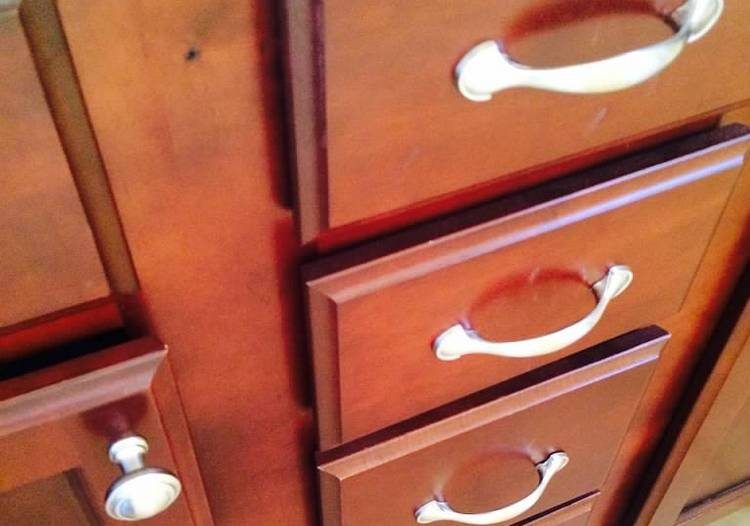 And here they are after a few coats of black paint and new sleek hardware (also a bargain at Home Depot): 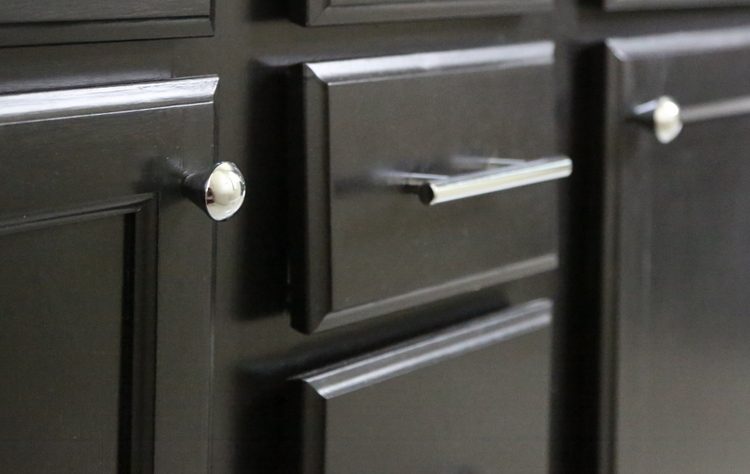 Although you might not have guessed that it would, black subway tile can do another thing:

To make this small bathroom seem larger, we ditched the tub (don’t worry – there’s one in the hall bathroom) for a gorgeous glass door and walk-in shower. The black tile at the back of the room makes the wall recede, increasing the perception of space. It also helps to take the tile to the ceiling, which also makes the ceiling feel taller. 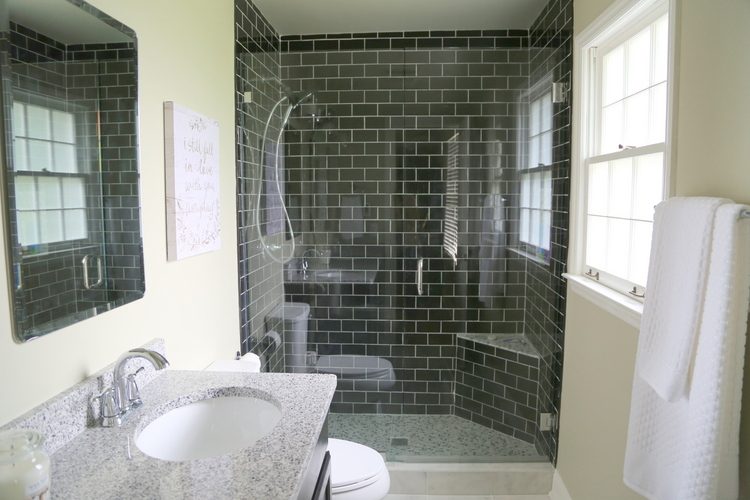 We replaced the countertop with a lovely black and white speckled granite, which was the biggest splurge in this bathroom.  The large frameless mirror and octopus lighting were changed out for a pair of smaller frameless mirrors and some updated light fixtures. 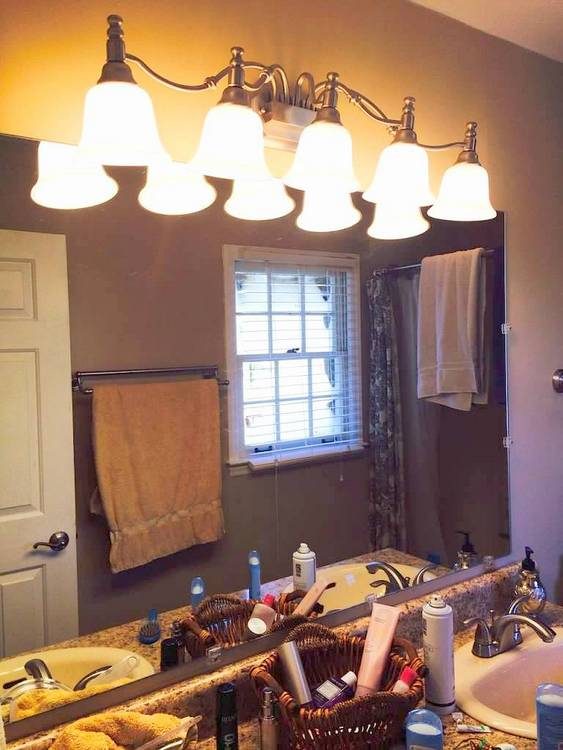 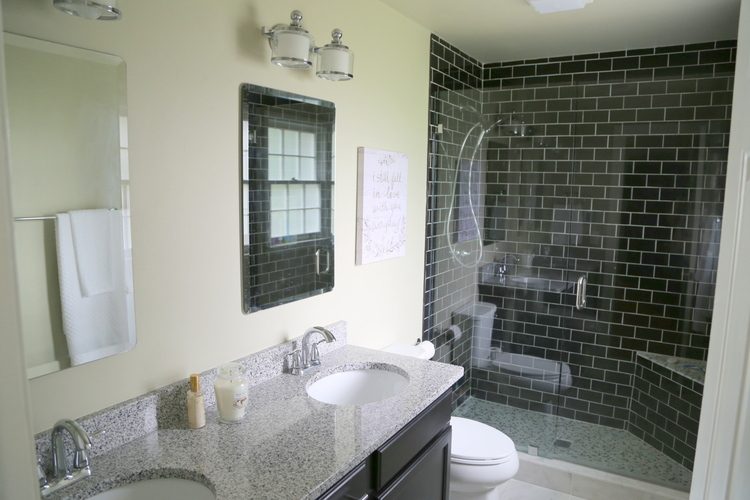 We purchased real marble tiles for the flooring – just a few dollars each from Home Depot. The light flooring keeps the overall look bright and crisp in contrast with the dark tile and cabinet. 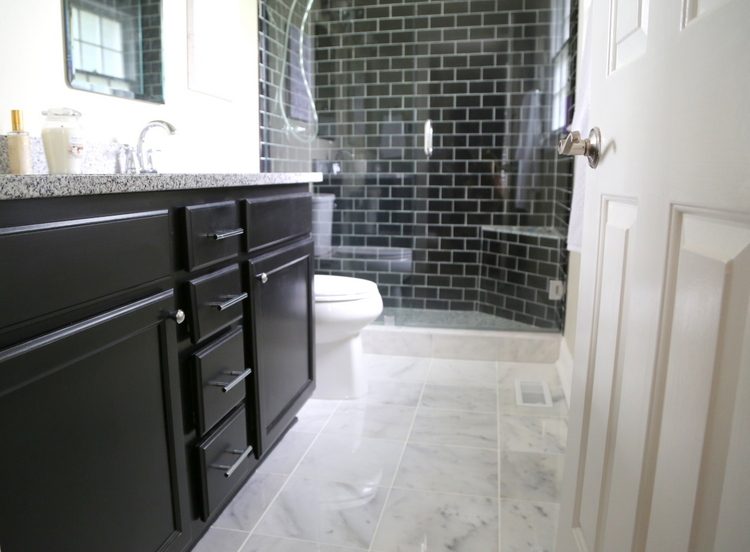 The contrast between the black subway tile and the white grout creates a crisp, clean look and quick wipe with a dry towel makes the tile shiny – and up close you can see how reflective the black tile actually is. 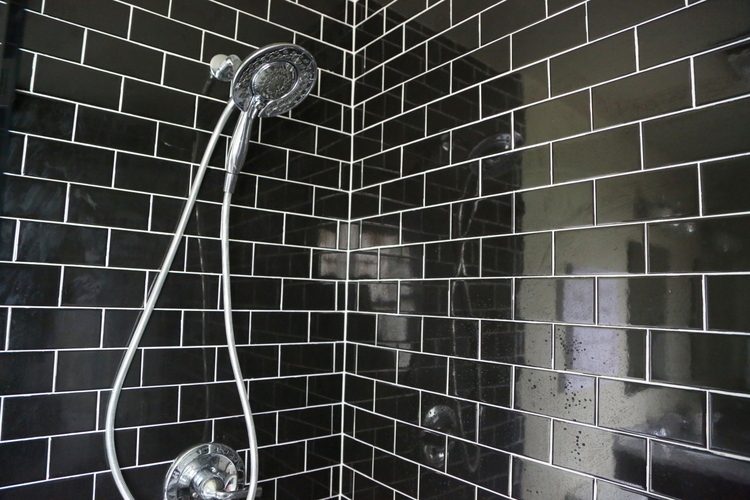 Need privacy in your bathroom, but don’t want to block the light? This window film is easy to apply and maintains all the light possible – and we saved big time on window treatments! 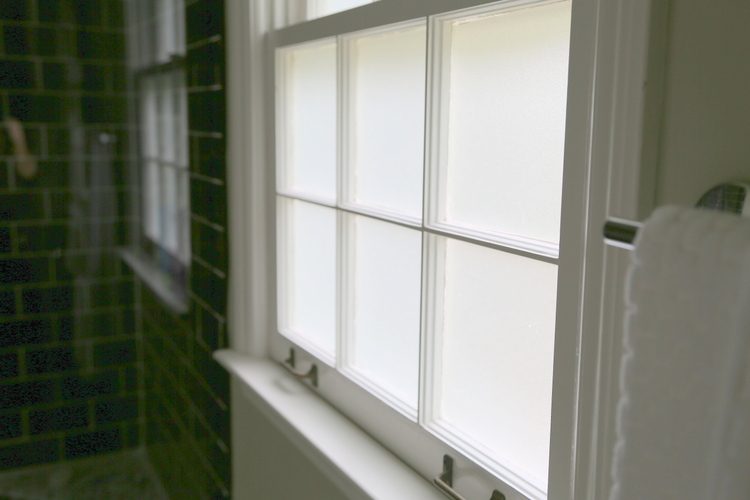 One last before and after of Allison’s bathroom: 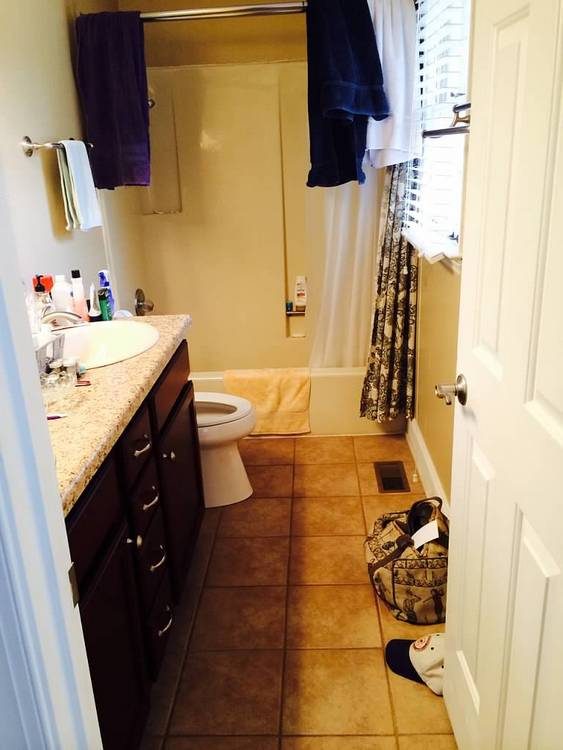 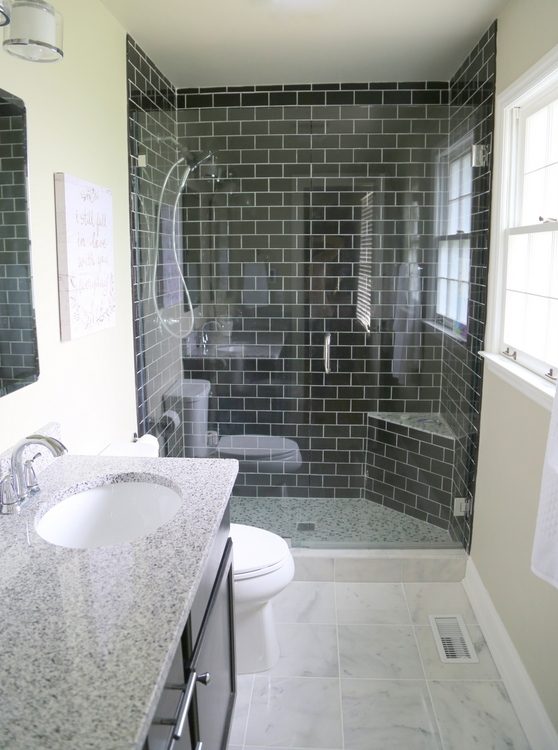 Have I convinced you to give black subway tile a shot in your bathroom?

I have a black vanity with black and white marble flooring in my bathroom. I have to say I really don’t care for black subway tile though. I prefer a very fresh clean look in the bathroom. I like when it’s trimmed in black tile but not the entire area in black. That crosses over from looking classic to rather depressing to me.

Kathy, You definitely have to balance the black out with a white floor and light wall color for it to work. I love white subway tile, but this is another option for those who want a classic look without yet another white subway tile bathroom in their home (we did that in her hall bath).

Gorgeous! I can’t believe how much bigger and brighter the bathroom looks. I have a question. We recently purchased a 1920 bungalow. The bathroom is narrow and feels sung. It is the only bathroom on the main floor. Would it be crazy to take out the tub and put in just a shower? There is a full bathroom with a tub In the basement. We don’t have any small children. I guess what I am concerned about is when/if we sale the house. Thank you. I love your blog and am currently waiting for your staging book to arrive to… Read more »

Interestingly, the younger demographic is moving toward larger walk-in showers in favor of shower/tub combos. When selling a home, those big walk-in showers are the way to go – BUT you need to have at least one tub in every home, in case someone has to have one! So you should be good, unless your basement is more of a partially-finished type level.

Most people with young children will want a tub for the kiddies!

Thank you, Kristie. That is interesting. But, I have to admit I have always favored a roomy shower over a tub. So, that is good news.

My husband and I just built a house and put a big walk-in shower in the master bathroom in lieu of a shower/tub. There’s a stand-alone tub in the future-kids’ bathroom which is enough for us. To give you an idea of our demographic we were both born in 1980. Oh, and the tile is a charcoal rectangular ceramic with carrera accents. Looks pretty sharp and LOTS of (envious) compliments.

Or, if you really want white subway or are concerned about the upkeep with white grout, the opposite – white tile/black grout – can look nice too. The black adds nice dimension.

I used a medium grey grout at my son’s suggestion (he installs tile and stone) in my kitchen, and it looks much nicer than if we had used white grout with white tile.

I like it a lot. I am having trouble seeing exactly what is on the shower floor. Hex tiles? Mosaic? Are they marble?

It’s a mosaic on the shower floor – also from Home Depot, but I don’t remember the name/brand.

I had never thought of using black subway tile in the bathroom as you have done and when I saw the title of today’s blog, I was pretty sure I wouldn’t like it. What a pleasant surprise! It’s very attractive!

WOW! What a difference! The after has a much more custom/expensive look! Love it!

Thank you, Lynn! Allison is very happy with the outcome 🙂

The black tiled bathroom looks great! I just prefer a white and bright, light filled bathroom … I’m not sure why though. Maybe it just seems cleaner to me
Darlene
http://www.BundleMeBaby.etsy.com

I love the posts on bathroom updates — just wondering, could you do a follow-up on how to find reliable contractors to carry out designers plans?

Looks great, but not for places with hard water. Although there are cleaners and treatments that will help keep lime build up at bay, its not worth the trouble for me. I once spent an entire day razor scraping and polishing black tile with white grout and black fixtures in a 1950s bathroom for a client. It looked spectacular when I was finished. I got paid for my trouble, but it made me swear to never have lots of black shiny surfaces in a bathroom ever.

If you were able to make a 60+ year old bathroom look that good, I’d say that’s some impressive longevity. I have dark green tiles in our downstairs bath on the walls of our 1940s bathroom, and although the grout looks a bit dingy, the tile still looks great. Unfortunately, all bathrooms require maintenance and frequent cleaning to keep them looking great, regardless. Doesn’t hard water negatively affect most bathroom surfaces, or are some materials better choices in hard-water situations?

Kristie, I have to agree with the last post from Kathy. Even if you don’t have hard water, black shows water spots terribly so towel drying the tile after EVERY shower is a must. Also as someone who has tiled quite a bit, I have learned to never, never put white grout in a shower or any other area that will see a lot of moisture as the mold and mildew will always get a hold of it and turn it yucky looking, be it sooner or later (perhaps try using a dark or medium gray grout…it gives the same… Read more »

Beautiful! I never would have considered black subway tile before seeing this post. Not sure I’ll actually do it, but it definitely gives us another option.

Thank you so much, Mary!

Bathroom Trends from Nashville Parade of Homes - The Decorologist

[…] the bathrooms in the four homes I toured, there are ZERO wood stained vanities or cabinetry. All are painted – either in a shade of gray, black, or off-white. The countertop in the above photo is […]

We had the painters remove the cabinet doors and roll the paint on them (after sanding and priming), and they sprayed the doors for a factory finished look.

I’ve had black tile in one of my bathrooms for 40 years. The tub, floors, countertop, sink and toilet are all white and the walls are painted Benjamin Moore Shaker Beige. There are no windows in this bathroom but I have a skylight that gives more than enough light and I have to say that I’ve always had loads of compliments on it. While I’ve painted the room and changed the cabinet out to redecorate I’ve never considered changing the tile. I’ve never thought it was out of style and would do it again in a heartbeat. The funny thing… Read more »

Nan,
I agree – black tile is a classic! And can be dramatic and sophisticated. I bet your bathroom is lovely!