I’m so excited to start showing you the reveal of my assistant, Allison’s, home makeover!   After a whirlwind day arranging furniture, hanging artwork, placing accessories, and one last shopping run last week, we are ready to show you the dramatic changes.  So come on in! 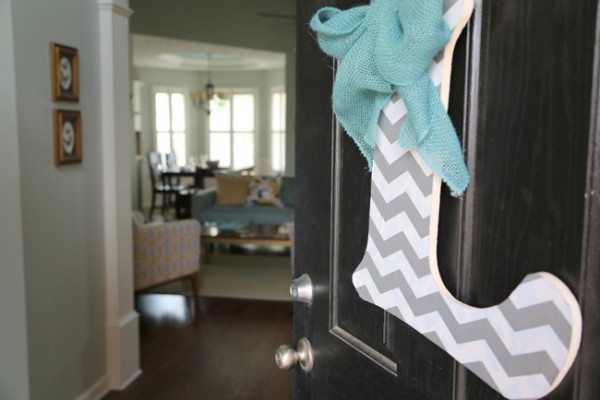 We took so many photos last week that I need to break it down into areas, and I figured the entry is the best place to start.  This is how we started, with the yellow gold walls that Allison chose about a decade ago. 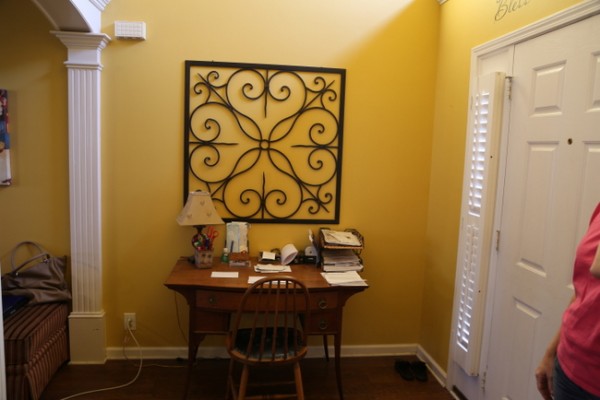 Since space is at a premium, Allison uses the entry as sort of an office space for herself.  It still works as an office space, but looks so much prettier now! 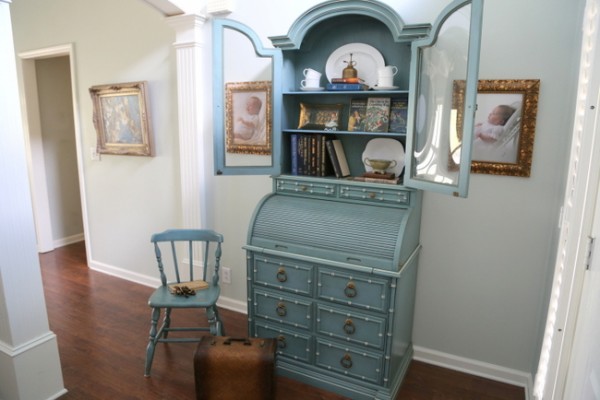 This roll-top hutch belonged to Allison’s mother, who passed away last October after a long battle with cancer. It was important to incorporate some of the pieces her mom left to her, and this particular piece not only influenced our color scheme, but also provided an attractive and functional focal point in the entry. 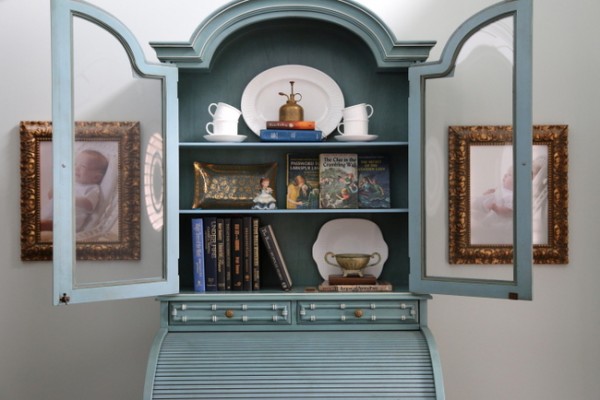 The roll-top provides a place for Allison to office and pay bills, and the drawers provide quite a bit of storage she didn’t have before. The upper part of the hutch gave us a place to place books and display a few pretty items, a few of which belonged to Allison’s mom. This was how the hutch looked when I arrived last Wednesday: 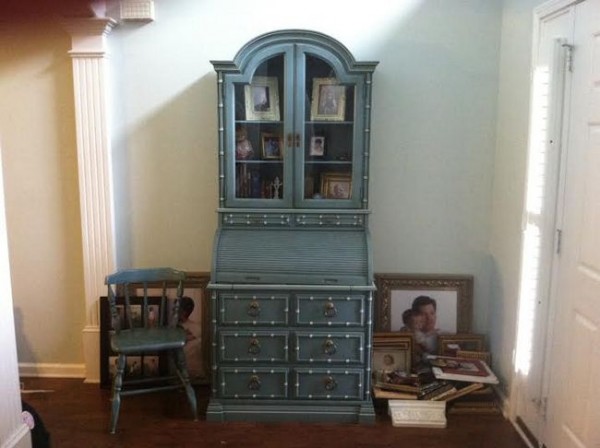 After arranging everything in the top of the hutch, we decided we liked the look of it with the glass doors open: 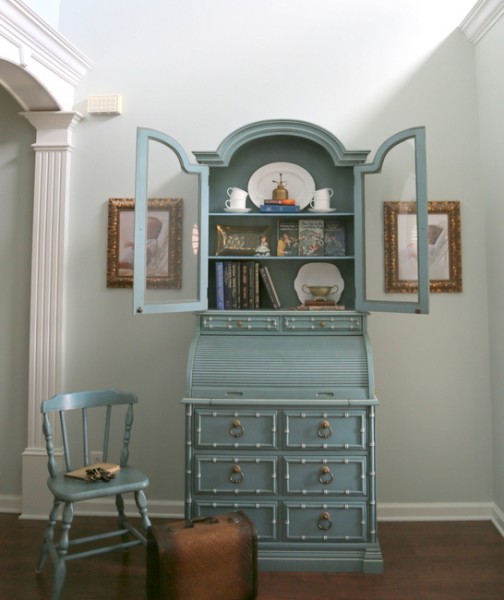 This is how things looked before when the front door was open: 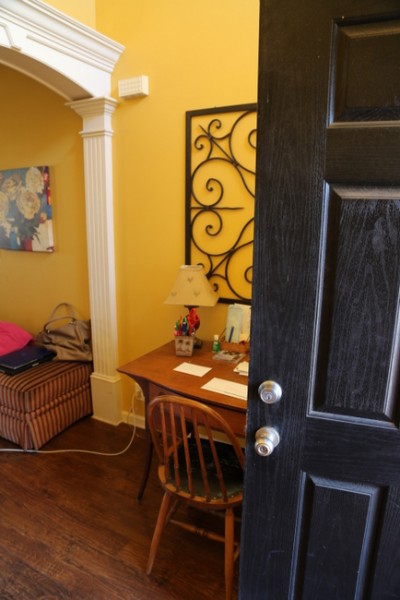 The after is a lot more welcoming!  Allison used some leftover shelf liner (you can get it here) to cover the chipboard “L” she bought.  It needs a couple of coats of Modge Podge to protect it from the elements. 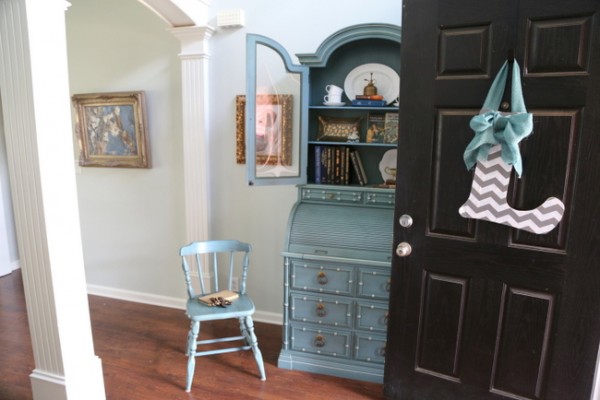 Oh, and let me show you the change in the vaulted ceiling above.  This is the way the ceiling was before we painted: 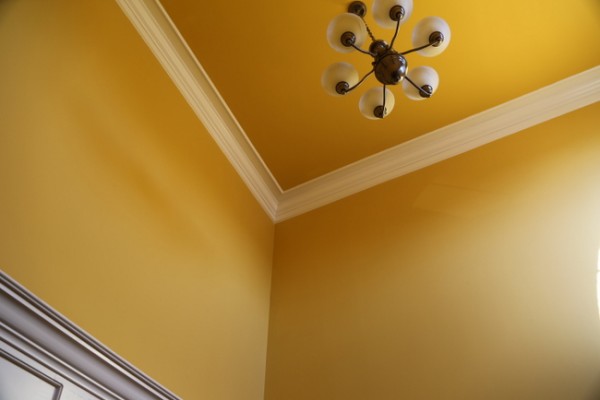 Before, the same golden yellow was on the ceiling and walls.  After, we accented the ceiling with a darker blue than the gray-blue on the walls. 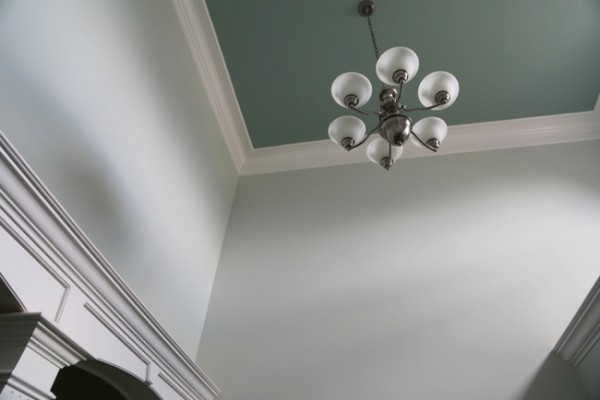 The new ceiling color ties in nicely with the blue hutch.  The entry light fixture has not been changed. 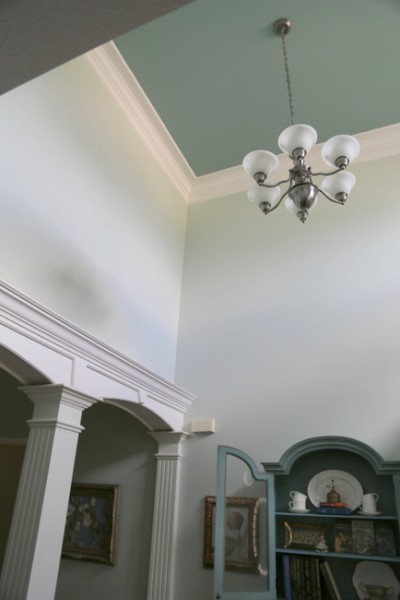 The only thing missing here is the rug that we ordered after the first one didn’t work.  Of course, it’s on back order, but it won’t be much longer.  Surely. Here’s the rug that you’ll see as you enter Allison’s home: 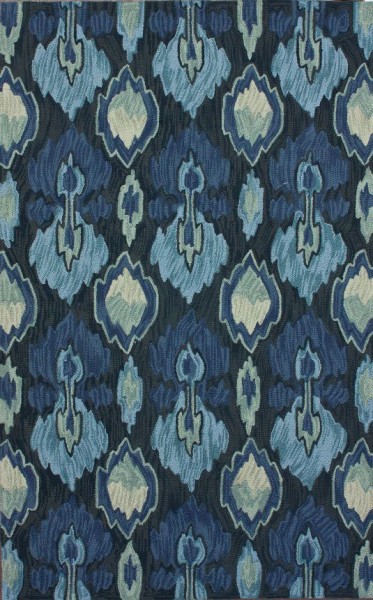 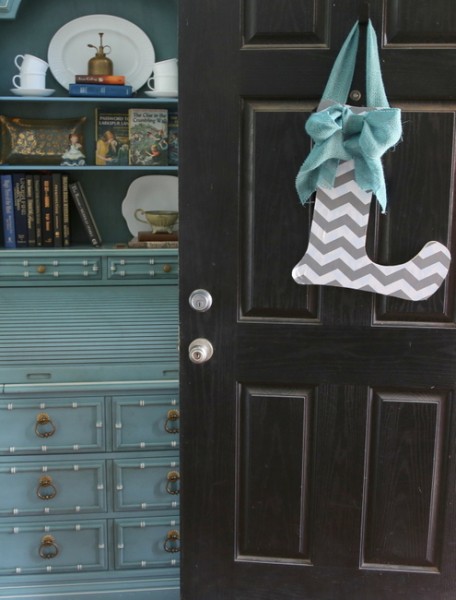 Next up, the living room makeover! What do you think of the changes you’ve seen so far?

I love it! I have the same yellow colors in my home (13 yrs.), but I still like it. I wish I had the courage to go blue or gray, but then I’d have to change everything! I did put the blue in my bedroom (SW silvermist).

I love the transformation! So pretty and I so how her Mom’s beautiful hutch looks in the entry. Definitely a WINNER!

*love how her Mom’s beautiful hutch looks in the entry. Was typing too fast! ha.

Thank you, Jackie! I think that hutch is from the 1970’s, and I absolutely LOVE it. Allison said she didn’t know how pretty that piece could look until it was set against those light blue walls. Sometimes the backdrop makes all the difference.

I just love it!! So pretty, peaceful, and welcoming. The rug rocks – can’t wait to see it in place. I swoon over blue!

Wow. What a transformation and that is one beautiful piece of furniture and chair!

Oh my goodness! This is gorgeous! I really appreciate seeing “real” homes where homeowners have to do creative problem solving (such as creating a bit of an office space in the entry). Your makeover for Allison is excellent–beautiful, calming, welcoming, and very personal. Super successful! Thank you for sharing!

So pretty! I love it! I’ve been thinking about painting my house a similar pale blue / grey, and I’m also contemplating painting the ceiling in my entry way. Or the dining room next too it. Or the living room. It’s open concept, and they’re all connected, but divided by beams and crown moulding. I think I should probably only accent one, but I don’t know… Fun decisions! 😉 Can’t wait to see the rest of Allison’s home makeover!

It feels calm when I look at the photo’sâ€¦.and that’s a sweet feeling.
That rug will complete the look and make everyone smile when they step inside.
Great job

So I looooove the hutch, especially since it has such sentimental value. But I also want to know what Allison thought of her coffee table? 🙂

She loved it!!! Turned out, NOT painting the top was perfect for the space – stay tuned to see it!

I looks fantastic! Great job! Oh and that rug is going to be TDF in that space. Can’t wait to see the rug.

Beautiful entry. Blue is becoming more and more one of my favorites. This post just pushed it up a little bit more.

What a beautiful, fresh update. Allison must be thrilled. Congratulations to you both.

Three Ways to Update Your Bedroom on a Budget

[…] house.  The before photo is above.  We pulled the darker blue from the entry ceiling I posted about here, and painted the hall bathroom walls in that color.  Then we found this shower curtain, art, and […]

How to Paint Melamine or Thermofoil Kitchen Cabinets