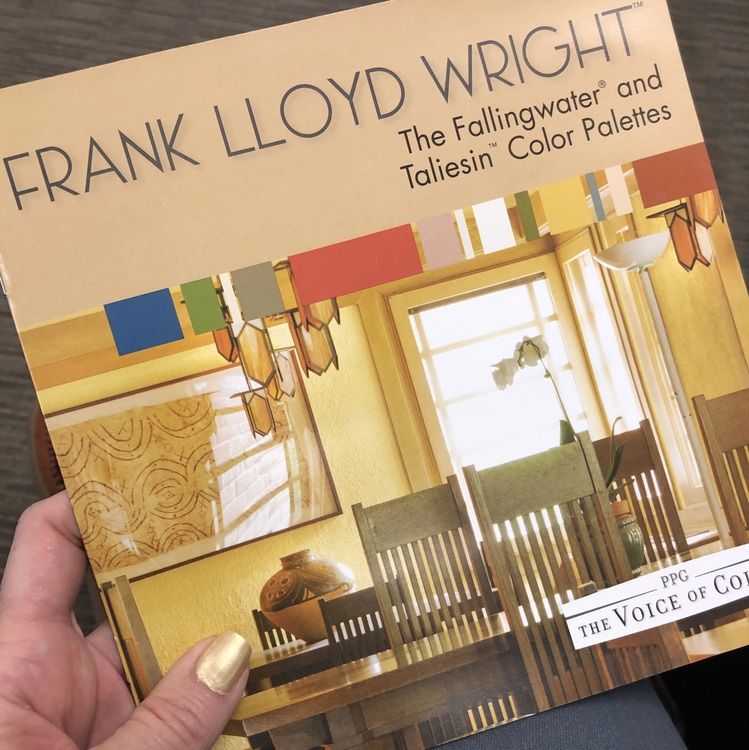 Frank Lloyd Wright (1867-1959) is one of American’s greatest and most infamous architects. He designed over 1,000 projects including residential homes, hotels, churches, civic centers, museums, and amusement parks. His most famous building is Fallingwater, which is one of the most important architectural structures in the United States.

FLW drew from two sources in determining his color palette on a given project; that is, the nature of the site and the building materials themselves. Fallingwater underwent a complete restoration in 2002 and is open to the public for touring. It’s at the top of my list for places I want to visit! 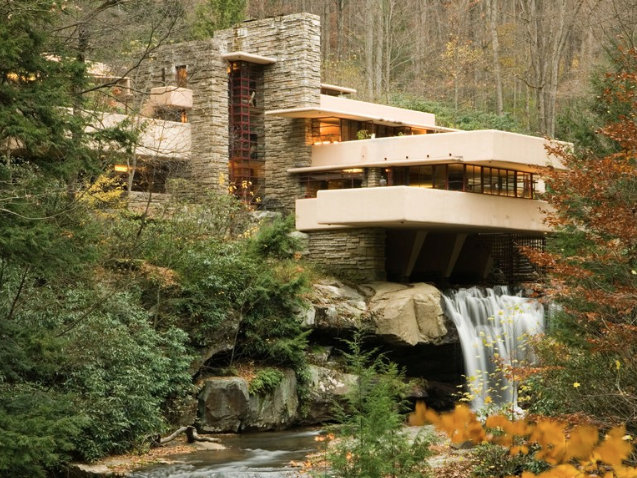 I’ve read several biographies about Frank Lloyd Wright (this one is my favorite). Most would admit he was a genius and a narcissistic control freak, among other things. One of the more interesting things to me about Frank Lloyd Wright is that he believed the architect should create total environments. Wright designed art glass windows, furniture, carpets, fabrics, tiles, and even china for the residences he designed.  When he later visited the homes he designed, FLW was known to scoff at and even remove objects that the homeowner dared to add to his original design. 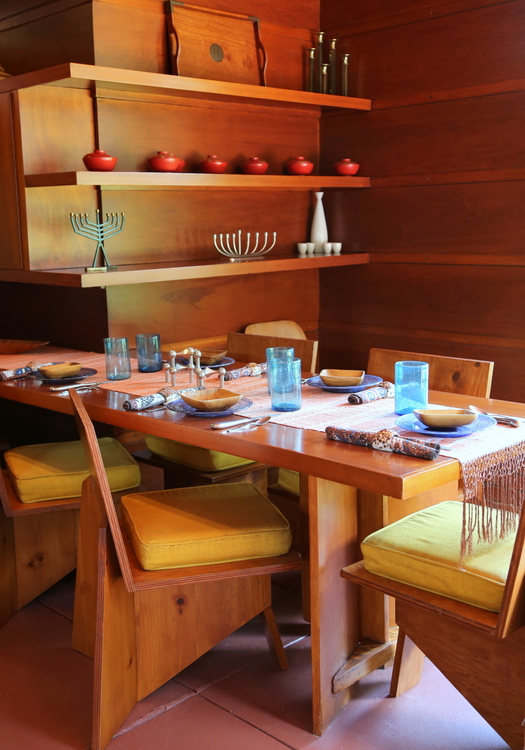 built-ins, furniture, and textiles in Rosenbaum House, photo by The Decorologist

FLW designed homes holistically and was extremely focused on the natural surroundings. He coined the term “organic architecture,” and his designs are geometric in nature. Wright looked down his nose at the Victorian style that was popular in his early years and instead preferred an austere interior with unnecessary elements. To be clear, “unnecessary” referred to any elements that he did not design!

Here are some of PPG Paint’s Frank Lloyd Wright colors: 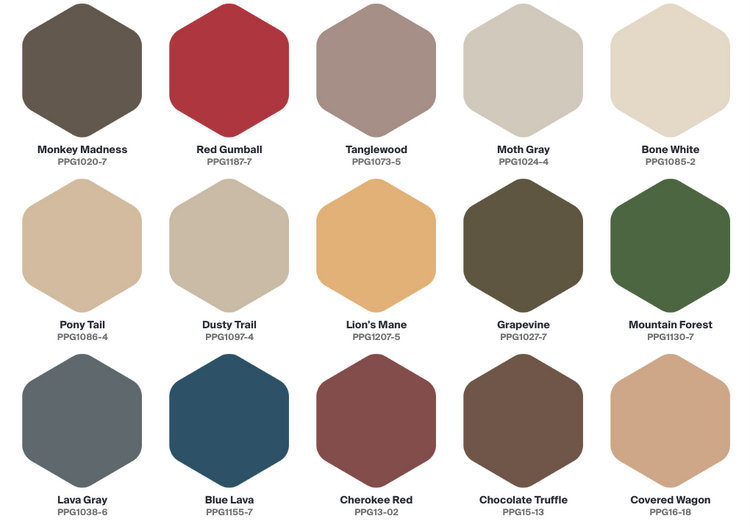 There are a total of 36 original colors in the palette, which are arranged in “micro-harmonies”. In another words, any four adjacent Frank Lloyd Wright colors create a pleasing and cohesive palette. 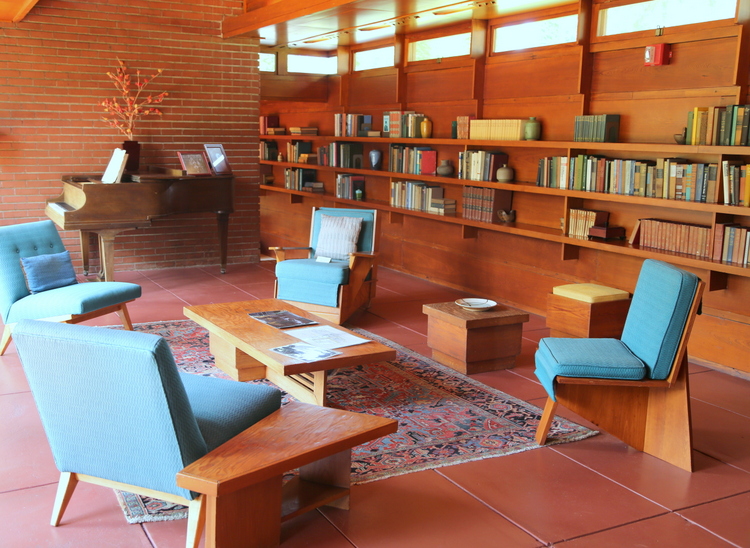 Rosenbaum House, photo by The Decorologist

This was Wright’s earliest residential commission after striking out on his own in 1895. It’s definitely one of my favorites: 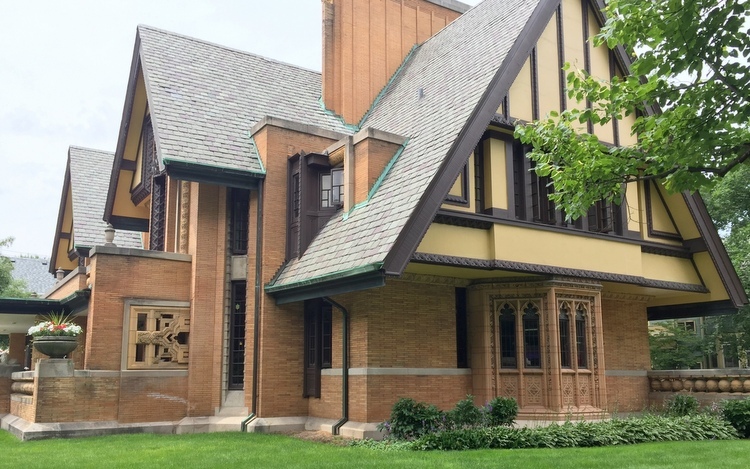 Moore-Dugal House in Oak Park, Illinois, photo by The Decorologist

The Moore-Dugal residence is a bit of an outlier when it comes to Wright’s major style eras, but it truly is amazing. 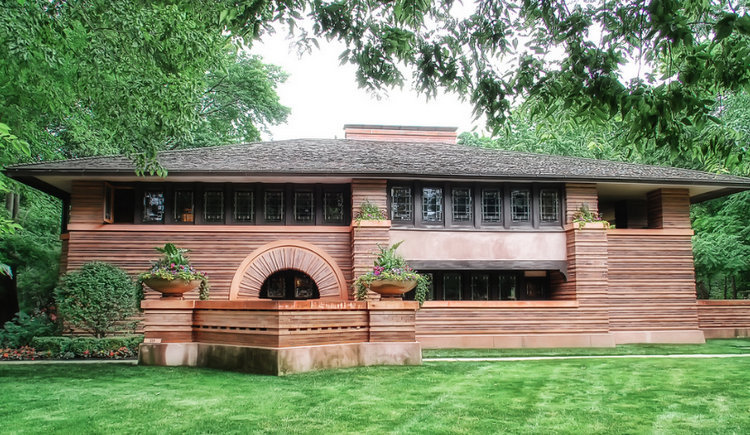 Next up, the Concrete Textile Block Style (1917-1924) began when Wright became interested in stamped concrete as a building material. This style is Aztec-influenced and built with concrete blocks with stamped patterns. The Ennis house is currently on the market for a cool 23 million and has been used in more movies than almost any other home. I remember seeing it in the old black and white thriller, The House on Haunted Hill! 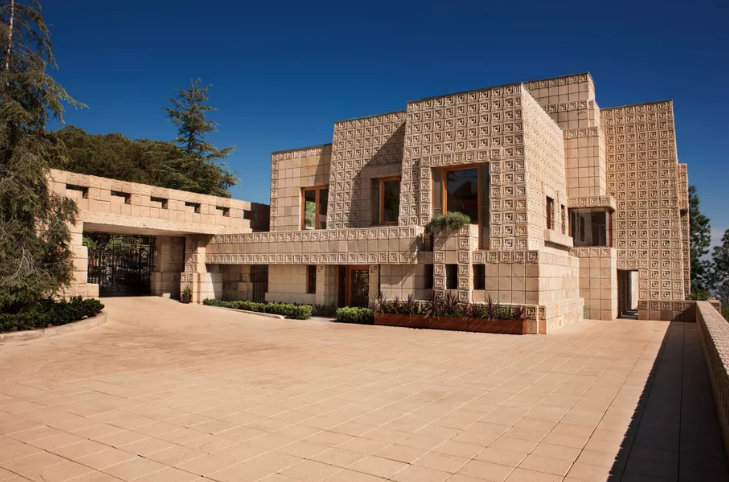 Finally, Wright wanted to create a truly American architectural style without ties to the past. He built many residences in the Usonian Style from 1936-1959. They were meant to be affordable, tract-type housing. Usonian homes are single story, feature long rows of windows, and have no basement, attic, or garages. Some have carports, which actually originated with Wright. I visited the Rosenbaum House four years ago in Florence, Alabama. The front is mostly brick, although the back of the house is almost all floor-to-ceiling windows. 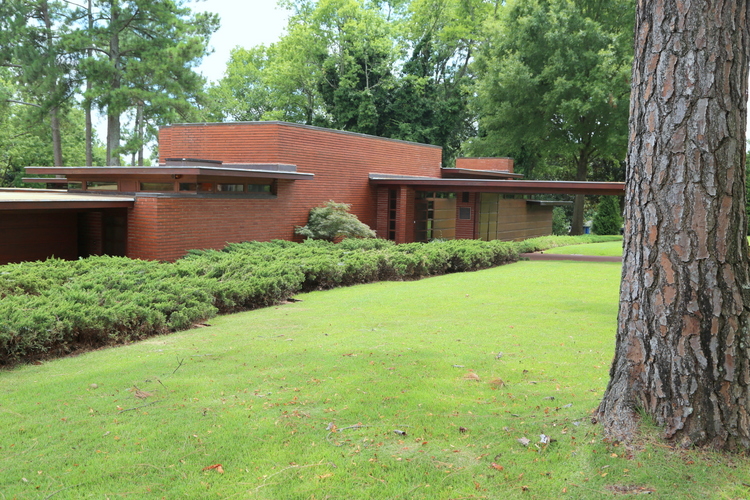 Rosenbaum house, photo by The Decorologist

If you love all things Frank Lloyd Wright, check out the other articles I’ve written about his work here, here, and here.

Overwhelmed with color trends? Want to know how to choose the BEST neutrals, colors, and color combinations? Wish there was a no-fail system that creates cohesive and beautiful color schemes for any home with any finishes?

Now there is! I’ve been doing this for years, and now I’ll teach you how (including all the specific colors). You can find out more HERE. 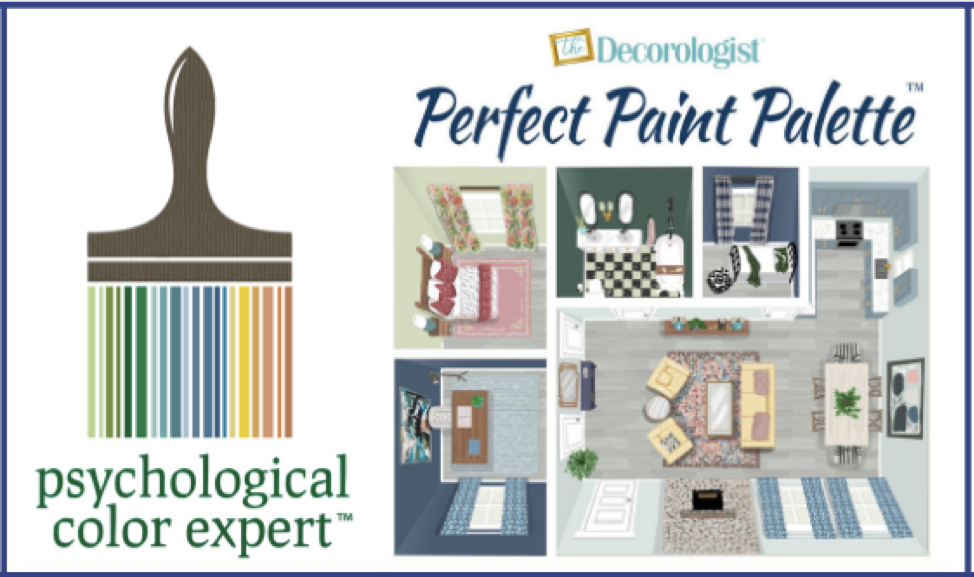 Wow! You’ve provided such a wonderful window into the FLW world. It has reminded me why I love him so…such a talented freak! Thank you!

Good old FLW and his uniqueness! PPG’s color’s seem to be all muted colors – which I really like and I can see how they go with his style. This is a great run-down of what your readers can do to be more like Frank!

Thank you, Sheri! I think it’s so cool that these colors from 1955 are still relevant – it all depends on the setting and style. How was KBIS??

Why was he “infamous”? That means well known for some bad quality or deed. Not trying to correct you, just wanted to know how he was “infamous”😊

Rane,
FLW was infamous for both his personal life and his grandiose ego. He a megalomaniac – narcissistic, womanizing, controlling, and manipulative. He was always in the middle of some scandal or another! His biographies are fascinating!

Didn’t know that! Thank you!

You’re welcome, Rane. One of the biographies I’ve read about FLW is called Many Masks – worth the read!

Thanks for the insight into FLW’s 3 styles, Kristi. I enjoyed learning about that.

When my parents first moved to Florida from California, when I was 5, the home they bought there was probably influenced by FLW’s 3rd style, as it had this same overall look to it…the low, flat roof and the geometric rectangular planes.

I admire his dedication to the entire aesthetics of the holistic environments he was creating for the people who lived in them. He’s a great example of someone giving people something they didn’t know they needed, to elevate their sense of well being in their home.

Thank you, Leslie! He was an innovator and disruptor. I’ve toured Taliesin West, Rosenbaum House, FLW’s Oak Park home and studio, and a few houses built by his students. Can’t wait to tour more in the future!

Great post, Kristie! I love the ‘Be like Frank’ list you shared! The color palettes are a testament to the fact that colors are pretty timeless, and that it is mostly the context that makes them a hot trend or outdated!

Thank you, Janet! Context is everything. 🙂

Try to time your visit to FLW when the rhododendrons are in bloom. Breathtaking.

Deanna,
Oh, great idea! What time of year do they bloom at Fallingwater?

I’m a PA girl…the rhodies bloom I Spring. I would call the local tourism office or do an online search to try to pinpoint the time, I believe accommodations and tours of Fallingwater book fast for this prime time. I would include a visit to his nearby Kentuck Knob. There is much natural beauty in the surrounding Laurel Highlands and I dare say some great antiquing!

Sounds wonderful, Jodi! Thanks for that info. I don’t think I’ll be able to make it this spring – way too many things on my calendar over the next few months, but I will definitely try to plan early for next spring!

Frank Lloyd Wright was brilliant and so far ahead of his time. Thanks for sharing his paint palette with us, these colors are evocative of the nature he so loved, and timeless. By the way, The Ennis House, that you have listed here, is currently on the market for $23m in Los Feliz. And the views are breathtaking!

I saw that online! I wish I could tour that one. Thank you for reading and for taking the time to comment, Jill!

“Infamous”???
Might want to look up the definition of the word.

Hi Mike,
FLW made more than a few enemies because of his narcissistic behavior. His architecture was not always functionally sound, he took credit when it didn’t belong to him, and he was a notorious womanizer.

I LOVE these colors and I LOVE anything FLW. I have visited many FLW Sites.I own a home where I usd FLW colors, and I prepare homes for sale and use FLW colors in those homes also.

Hey there.. I’m in Canada and trying really hard to find an online version of the PPG color booklet you show in the post. Do you know where I can get one??

DiscoverNet | How To Decorate Your House Like Frank Lloyd Wright

[…] to The Decorologist, Wright took color palette inspiration from the nature surrounding the site and the building […]