Tudor Revival style architecture has always been a favorite of mine.  There’s something about this style home that welcomes, enchants, and seems to wrap its arms around you. 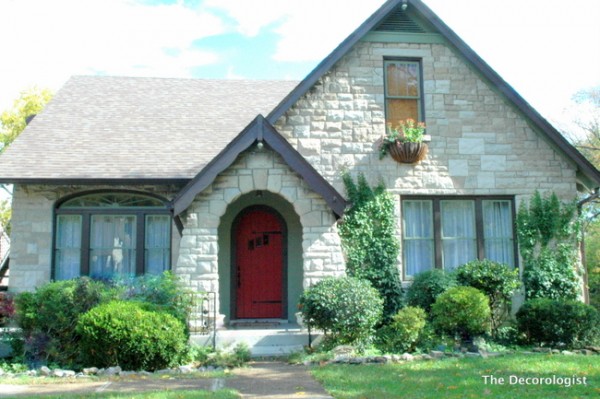 Exterior Colors by The Decorologist 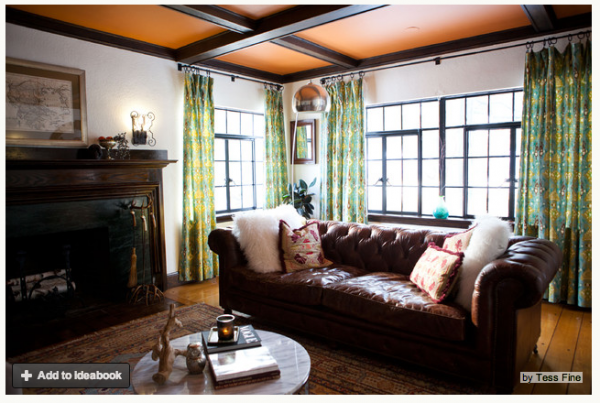 There are two ways you can effectively create a paint color scheme for a Tudor style home. You can either 1) fully embrace the period it represents and try to preserve the character of all its architecture. 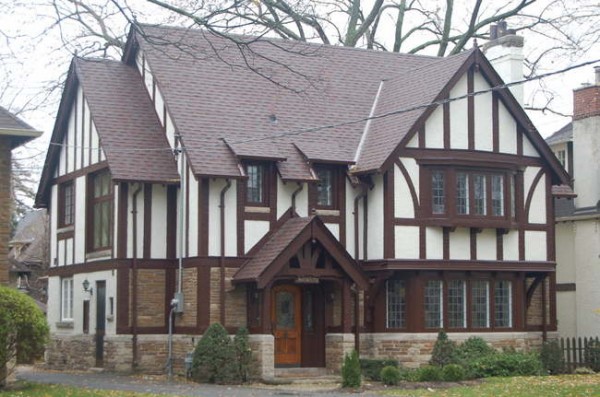 Or, 2) you can choose to strategically lighten up the overall look while still respecting the inherent charm of the architecture and finishings.  I call this look “Tudor Lite.”  It’s a bit more Frenchy rather than British, a bit more feminine rather than masculine.  We will be doing a Tudor Lite for the exterior of my local clients’ Nashville home, using an off-white color on the body of the house and a low-contrast color for the trim. 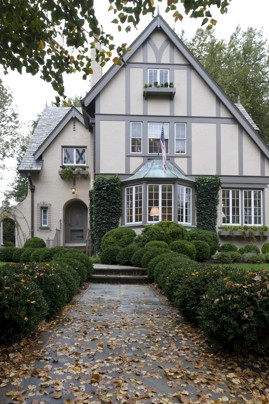 See below how Steven Gambrel painted out the previously dark wooden beams and trim to create a softer, lighter look while still drawing attention to that architecture?  I love this photo because it’s practically the same color scheme I have in my dining room! 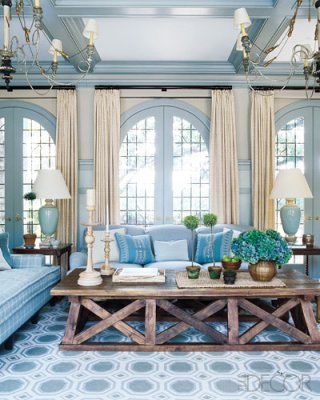 When you are dealing with important architectural elements like those common to the Tudor style, color placement is at least as important as the specific paint colors you choose.   For the Kentucky Tudor, we chose paint colors and paint color placement that emphasize the more historically-correct architectural elements of the home’s interior while toning down those elements that overpower and distract from the best features of the home. 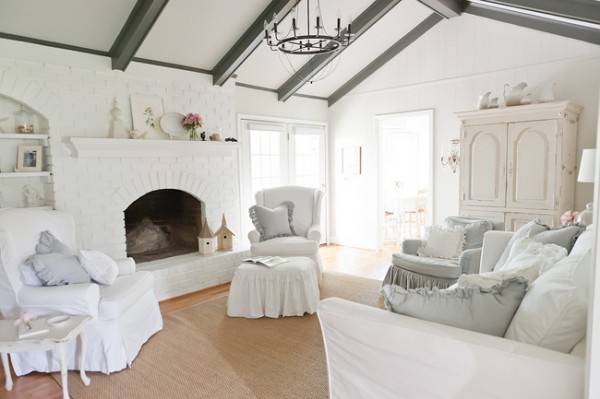 The whole look of Tudor Revival harkens back to the days of the royal Tudor family of England of the 1500s, but the ones built in the last century are probably best described as “mock” Tudor or Jacobethan – more rustic and countrified versions of medieval Tudor style.  In 1970 – 1980s versions of Tudor Revival, you will often find elements that read more “colonial” and “spirit of ’76” than you see in the Tudor Revival of the early 20th century.  That’s definitely true of my client Amy’s home, so I helped her separate out the elements she should play up and the ones that should be played down, or eliminated altogether.  For example, there is no need to retain the dark cabinets in her kitchen because they read 1980s more so than they read Tudor style. 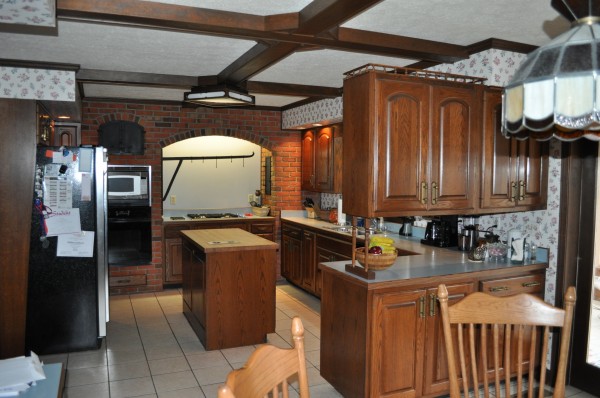 Lightening up those cabinets and installing lacquered dark wood for a countertop will put the emphasis on the fabulous beams and brick detailing.  Stripping the wallpaper and replacing the light fixtures will de-colonialize the look, as well. 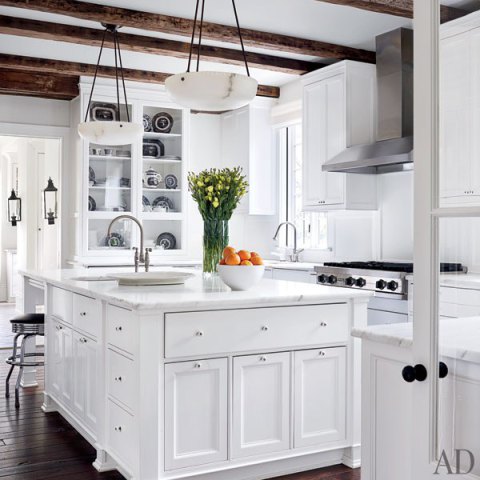 In Amy’s amazing living room, we are painting some of the dark wood elements – but not the majority of them.  Again, the color placement will be strategic.  Strategic in such a way as to emphasize the best architectural elements of the space (such as the ceiling beams, half-timbered walls, and diamond-pane windows) while downplaying the things that darken, distract, and overwhelm. 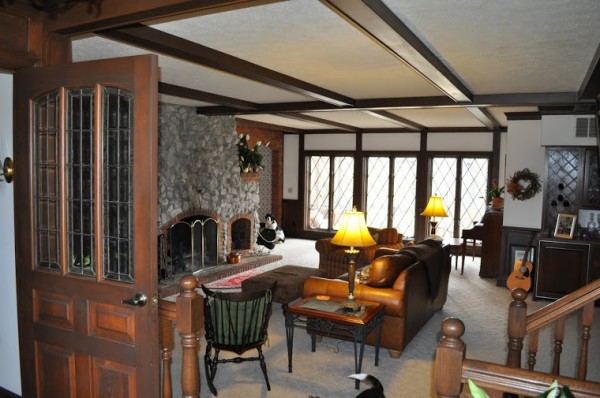 I recommended painting out the chair rail and wainscoting below, as well as the staircase spindles and newel posts, in a warm white trim color like that on the ceiling.  The walls above the chair rail will be painted a green color that will make the wood trim and half-timbering look richer. 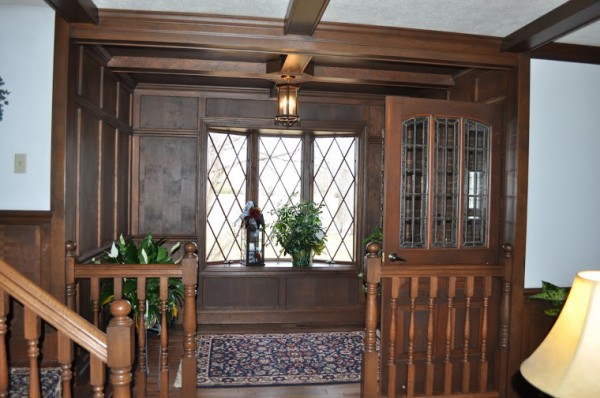 The impressive entry panels will remain unpainted.  You can see in the above photo that the banister and spindles really read a bit 1980’s, so those are going to clean up with off-white spindles and a black handrail.  A William Morris-inspired rug with a light background for the entry would also be a good choice moving forward. 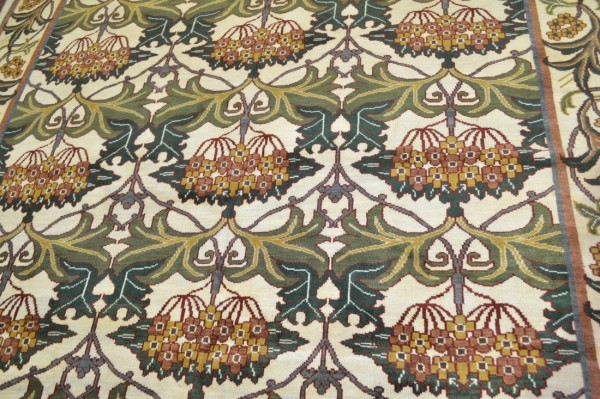 If you’d like to learn more about how to make the right paint color and color placement choices, take a look at a preview for my Color Workshop Video!

Great post! That looked like a difficult consultation. So much to consider, but I love your ideas! Can’t wait to see the afters.

It was tricky, but my client was so fun to collaborate with. This house is so much more interesting than the builder basic McMansions and the open concept, vaulted ceiling homes I deal with most of the time! So much character and attention to detail – we just need to take it up a notch and downplay the 1980’s parts!

Lovely post, Kristie! There are so many possibilities with this architectural style– many of my clients want to lighten things up. I love soft earthy greens with a great neutral on exteriors to bring them out of “Merry Old England” ~

Another great read this morning, thanks. You HAVE to post the afters of this!

Yup, now we are all primed for the After pictures!

When you paint stair banisters and newel posts, can you just clean them and then apply paint or do you have to strip the varnish first? Are you really painting these elements or just staining again?

You definitely need to prepare the surface for painting – usually sanding and priming with an oil-based primer. However, there are some new products like Benjamin Moore’s Advance that make it easier than it used to be. It’s a hybrid of oil and water based paint, and it’s recommended for wood cabinetry. It requires less prep work and no priming.

Is this process reversible? If, in the future, a different owner of the house wanted a more traditional English Tudor look, could she remove the paint and re-stain the wood?

It’s possible to remove the paint and restain, but it would be a lot of tedious work!

Can you let me know the stucco and trim colors used on the Tudor lite exterior? Thanks.

Hello. I just came upon your site. I love colors for the tudor house. Cany you tell me what you used? We are about to paint our tudor house right now and I would like to do the same.
Thank you.

Hi! I love the tudor light home!! Can you please let me know what colors where used?? Thanks 🙂

Theresa,
If you are interested in this color palette or any other that I created on this blog, you can have the specific colors, brands, and sheens for a very small fee. Contact my assistant at [email protected] if you want more info. Thanks!

Did you end up paying the fee to get the paint colors? Was it worth it?

Your suggestions sound good, but it’s a bit disappointing that you don’t showcase the ‘after.’ Seem s a bit pointless.

Sorry, but this was an online consultation and the homeowner has yet to send me photos. I can’t always control outcomes of my suggestions, but I’m hoping she will send me “after” photos at some point!

Honestly, I am very disappointed in the white on white on white lack of color scheme you used in two of the three rooms I see here. It is not warm, it looks sterile, it is not family friendly, or living friendly at all. It looks too much like the cookie cutter contemporary lack of color designs I see today from what seems to be a majority of designers. I would think that especially in these older homes with all the great woodwork in them, that you would realize that color, like yellows and golds, oranges and reds, all enhance… Read more »

Loved this post! I have been remodeling a Nashville 1980 Tudor as well. Trying to find the nerve to paint the outside. Do you have any before and after pics of the painting? Would love to see those!

How Do You Paint a Tudor Style Home? | Iconic Form

Are you still in the Nashville area? We recently bought a Tudor style home that was built in 1989 and I have no idea what to do with it to make it less ” gothic” looking. We live just outside Knoxville