Last week, I took a “working retreat” down to the Florida panhandle to focus on my online exterior color course. When I returned, it dawned on me that I never posted the befores and afters of some of the bedrooms and bunk rooms in the beach vacation house project I completed last spring! On this frigid winter’s day, I thought it might warm me up a bit to share them with you! 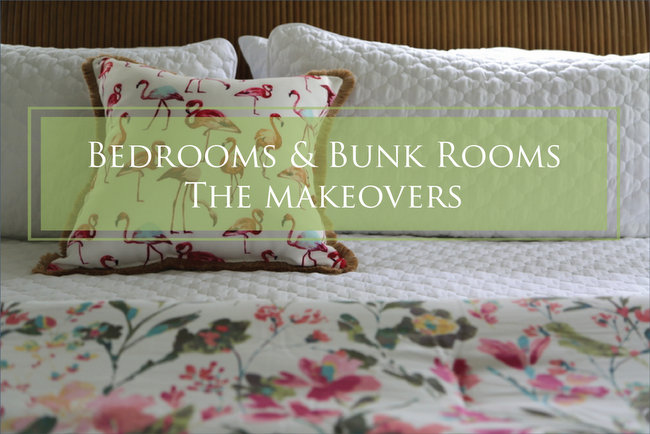 This beach vacation rental has basically three master bedrooms – all three have king-size beds and adjoining full bathrooms. I showed you the makeover of the largest of the three bedrooms here. The second master is on the same floor as that one, and here’s the “before”: 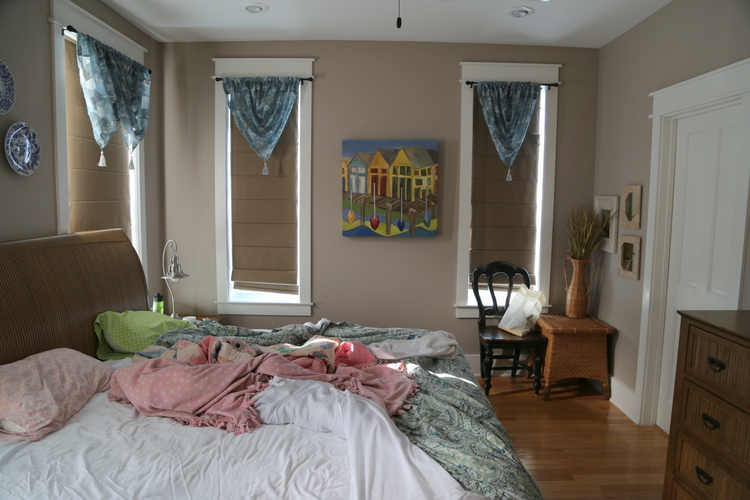 We cleared out practically everything in this room to make way for an entirely different feel, but we did keep the shades and the ceiling fan. The new wall color is Benjamin Moore Steamed Spinach 643, which I’ve previously used here and here. 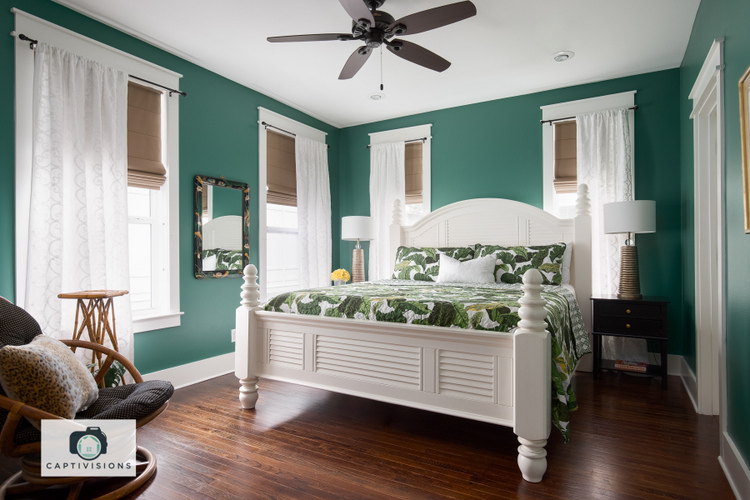 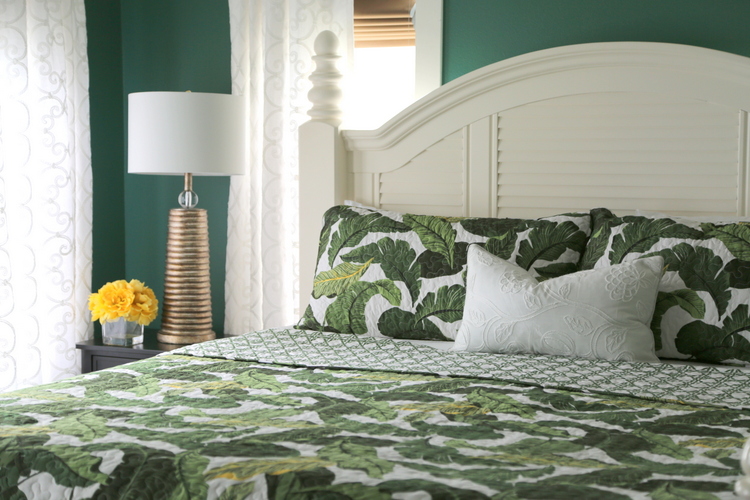 The third master is the smallest and is located on the main floor with the living room and kitchen, which is great for anyone who can’t or would rather not climb stairs. Here is the “before” in all its multi-colored glory: 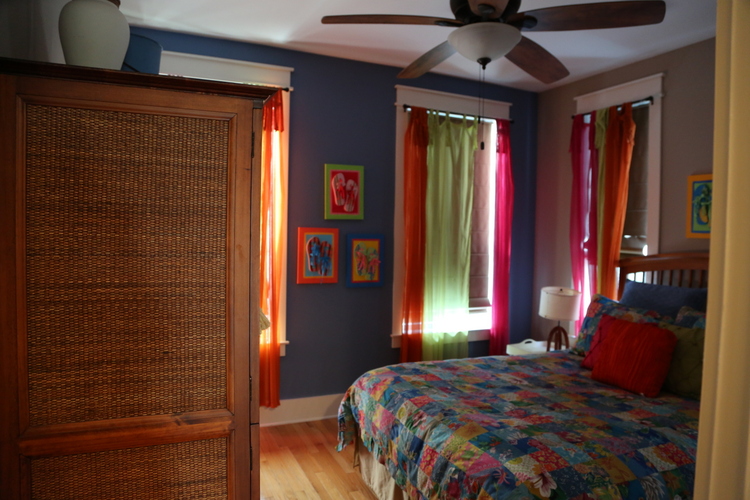 Although there’s still plenty of color in this bedroom, it’s a brighter and more peaceful place in the “after.” The wall color is Benjamin Moore Silken Pine 2144-50, which is a fresh and fantastic off-white with a hint of mint that I used for the majority of this house. 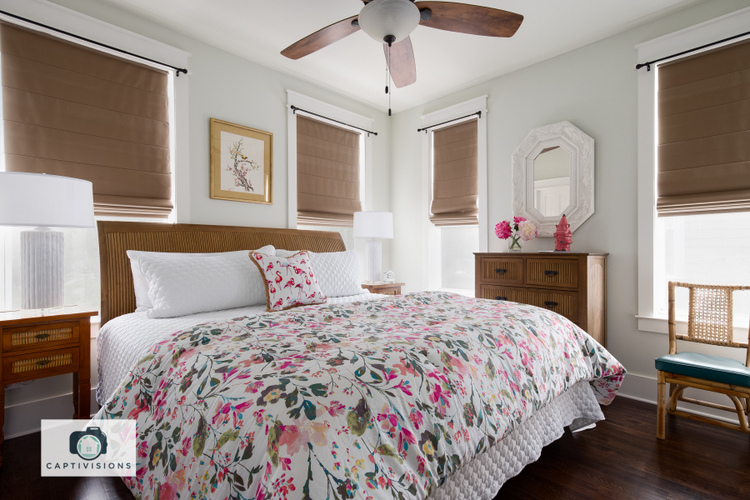 I was so happy to find this beautiful flamingo pillow – the fringe tie in perfectly to the wood tones in the bedroom furniture. 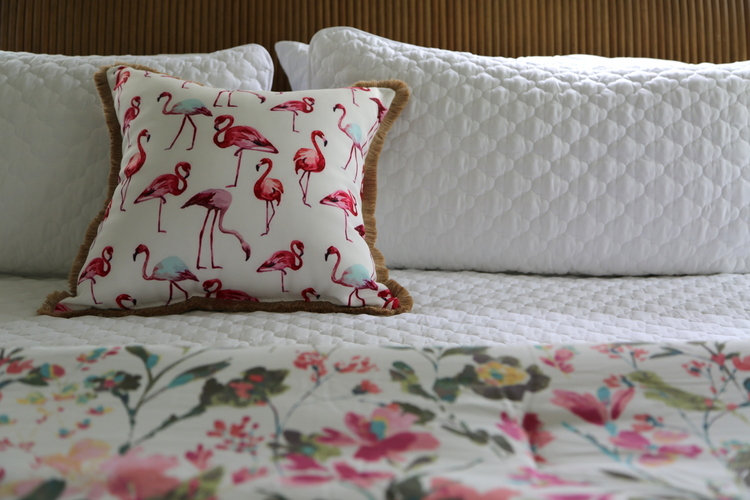 There are two bunk areas that are now in the house, so let me show you how those spaces started out. First, let’s go up the stairs again to the second floor. This was the stairwell before the redesign: 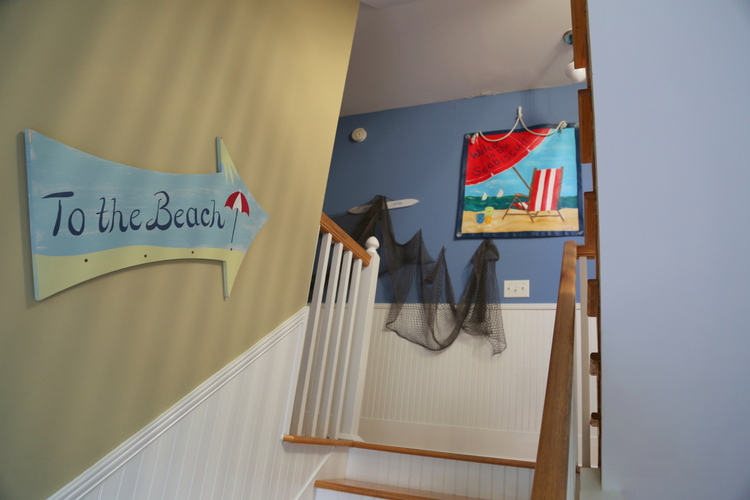 Again, Silken Pines was our palette-cleanser! A new stain on the hardwoods and black paint on the handrails and newel posts helped, as well. 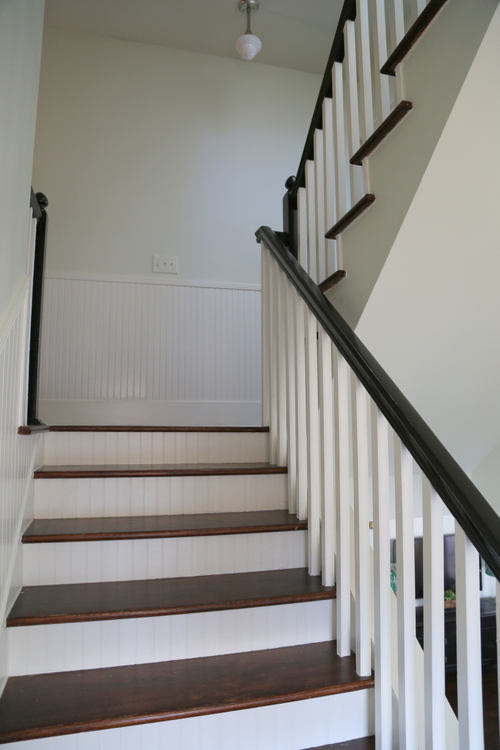 Between the two masters on the second floor is a wide hall with a built-in bunk bed, rather than a true bunk room. This is the “before:” 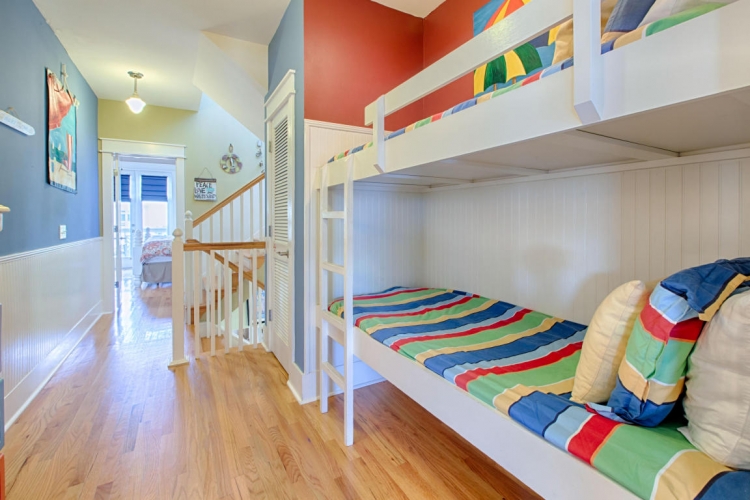 I swear, y’all, there were so many different wall colors in this house!!!  We decided to go for a more sophisticated, but still child-friendly, hallway bunk area. 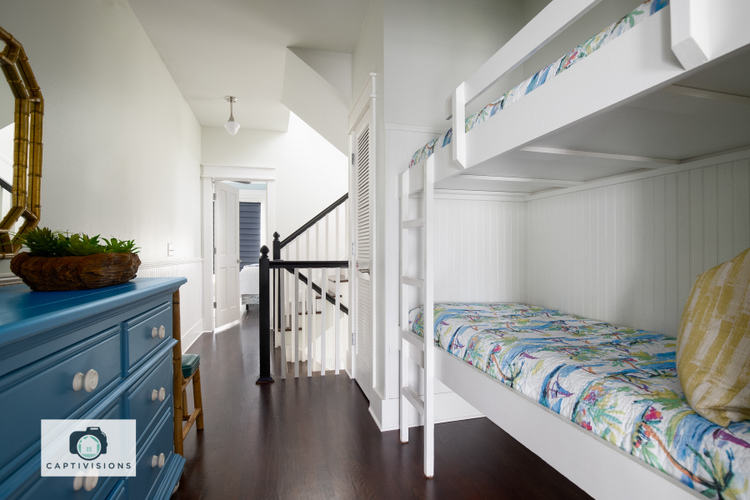 This dresser was originally a part of a set that we painted to coordinate with the new bedding. 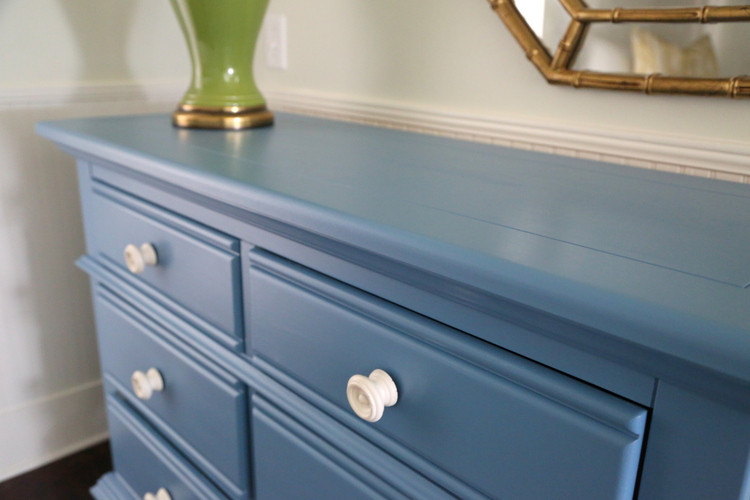 Finally, you go up another flight of stairs to the small tower room with an attached sundeck. It’s all windows up here, which necessitated adding an extra heat/air system that nestles into the ceiling. It’s called a mini-split, and is a great option for room additions or repurposed areas that need extra heating and cooling to make them more functional year-round. In its “before” state, there was a rumply old pull-out sofa up there where it was too hot to sleep. 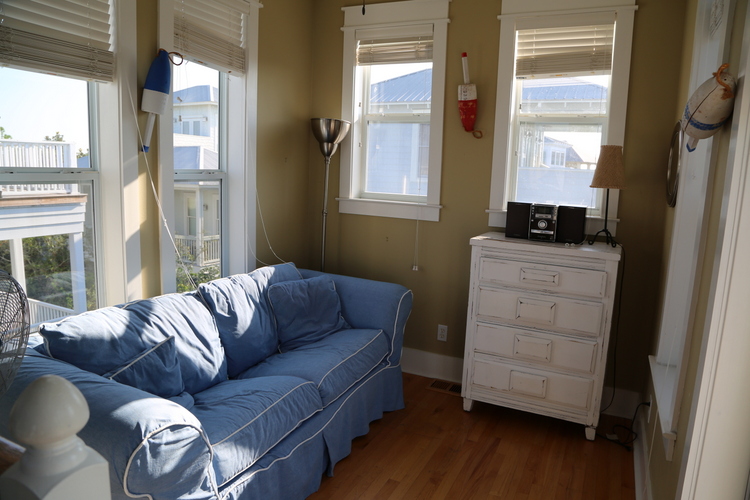 We repurposed the space as another bunk room – this bunk bed includes a trundle beneath. With the new heat/air unit, it’s as pleasant as the rest of the house. 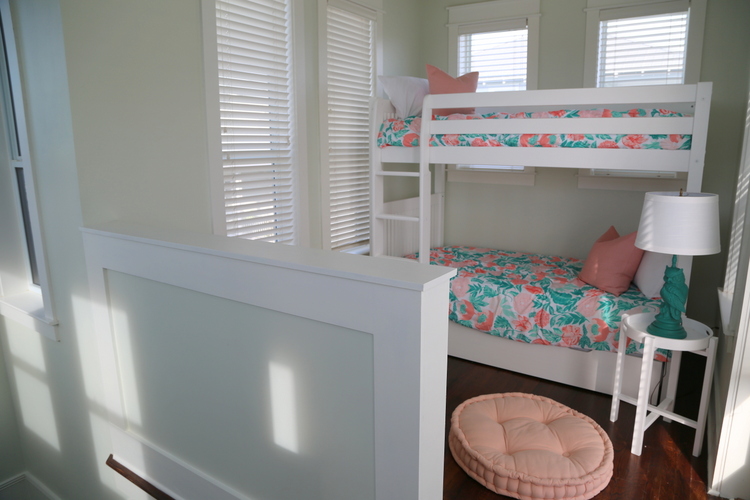 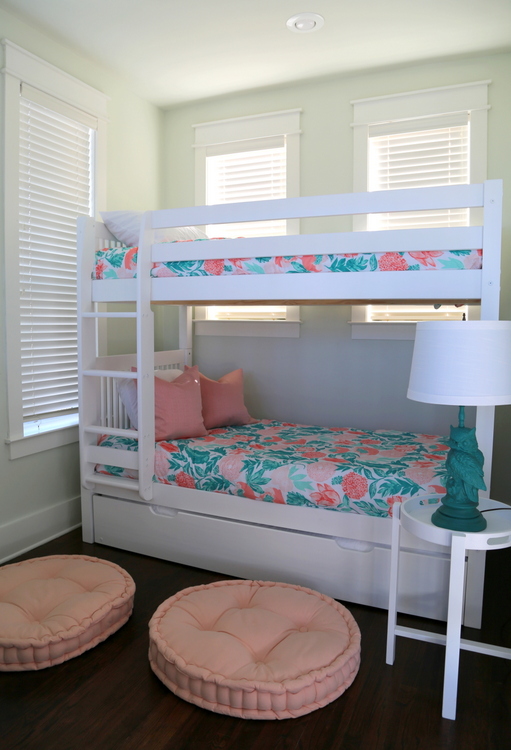 Don’t you love the tufted floor cushions that kids can use to sit on while playing video games in front of a flat screen television? I did, too – but they are no longer in the beach house. I can’t fathom how someone renting the house would blatantly steal them, but that’s what apparently occurred. 🙁

When on vacation here in October, we had to evacuate for a few days early because of Hurricane Michael. While Seagrove Beach was not impacted, nearby Panama City Beach and Mexico Beach were mercilessly pummeled. While we were in the area last week, we decided to join a group of volunteers from an amazing disaster relief organization to help with hurricane clean-up about an hour from where we were staying. 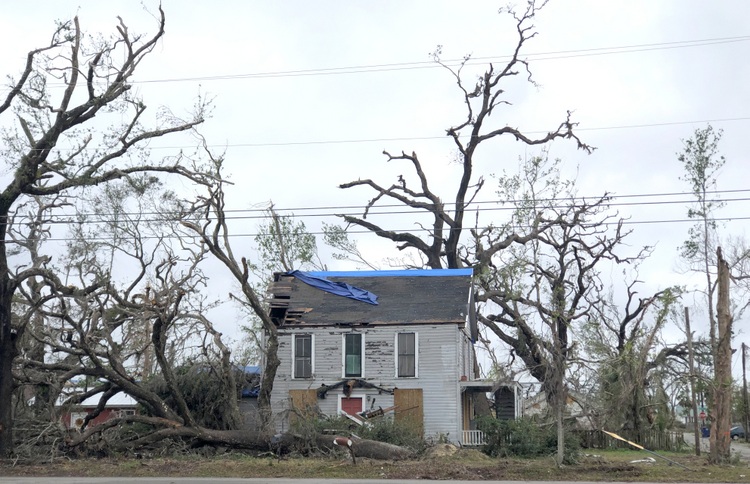 To my surprise, we were assigned to assist the chainsaw team working at a cemetery. We cleared debris, hauled and stacked cut logs, and uprighted overturned gravestones and floral arrangements. 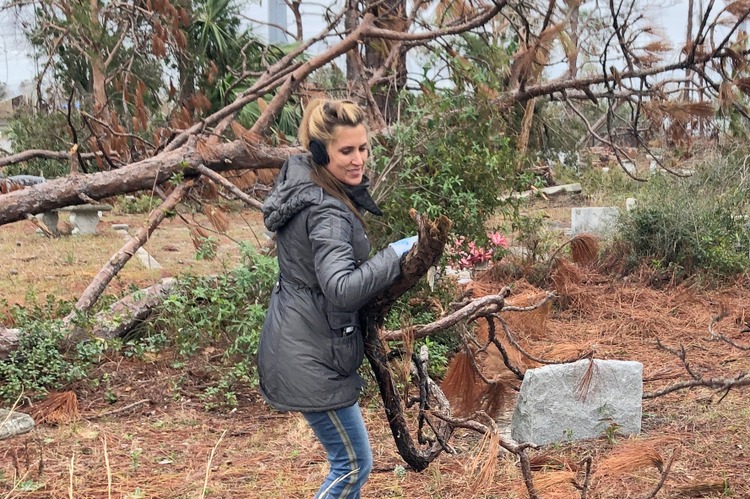 Mr. Man sustained a minor injury while trying to show off by doing an overhead press with a jagged log (now that it’s healing, it looks like I gave him a hickey). It ended up being a day of contemplation and gratefulness, followed by a great night’s sleep and a lot of sore muscles . . . 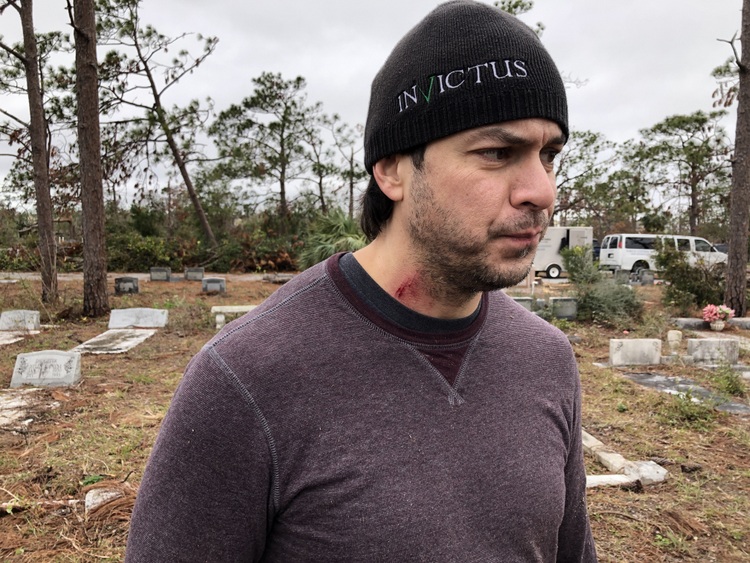 If you’d like to see the entire beach vacation house or maybe even rent it out yourself, you can find it here!

Our 3-day Expert Psychological Stager™ course is six weeks away and is currently half filled. Please sign up soon if you’d like to attend, and let us know if you have any questions! Click here to find out more.

← A Passion for Home - Ticket Giveaway for the Antiques and Garden Show of Nashville! My 8 Favorite Things at the Antiques & Garden Show →
Subscribe
Login
30 Comments
Oldest
Newest Most Voted
Inline Feedbacks
View all comments

Hi Kristie, Where to begin?! So much fabulousness in one post! First, kudos to you and Mr. Man for volunteering in the Panhandle. The devastation is going to take a long time to recover from, and it’s nice to see that people still care long after the storm is no longer a news story. I’m sure your efforts were appreciated and I hope your husband is much better now! The makeover is stunning! I love seeing the additional rooms, as well as the links back to where you used that gorgeous green in your own home. It, together with the Silken Pine, is glorious! I also love the bedding. Textured whites remind me of my parent’s white chenille bedspread they had when I was a child, so soft and inviting. I use a white matlessé and love that, too! All of the rooms are so refreshing. What a shame that a renter took the tufted floor pillows. Those were so cute! I know I will read your post again and discover a lot of details I missed!

Thank you so much, Laura! I appreciate your thoughtful comments. I love looking back on the “before” of this project and the difference that the new colors and color placement make.:)

I love it. Great job. What a transformation! The neck injury story made me chuckle lol

Thanks Robin! Yeah, he was a little embarrassed as he just that morning said something to the effect of “the first rule of working out is to not hurt yourself.” But then as soon as someone said, “can you press it over your head?” he couldn’t help himself! haha

I loved the Benjamin Moore Silken Pink paint color, and the hallway bunk beds. What a wonderful getaway!

Thank you, Michelle – Silken Pine is so refreshing, without being a plain, stark white. I think it worked well here!

Kristie, what lovely rooms! You are always an inspiration … in design and in your willingness to help others!

You are very kind to say that, Lynne – thank you!

So, SO beautiful!
another incredible job my friend!

I love the owl lamp!

Thanks, Lezlie! It was originally brown – I had to paint it green!

What a difference! It is all fabulous! Do you know if the white curtains in the first makeover can be purchased locally or online? They just might work for me. Thank you for volunteering. I’ve heard the area still has a long way to go and much more to do.

Thanks, Pam! I purchased those curtains locally, but unfortunately they have since been discontinued.

Love the green room!! You are so talented. You took an over-decorated house with too many colors and turned it into a peaceful+ beautiful, relaxing retreat.

Thank you so much, Jennifer!

What a gorgeous transformation!!! Love this one SO much. Can you tell me where you got the window treatments for the flamingo pillow room? Thank you!

Thank you, Jackie. The original shades on the windows of both rooms were the one thing we kept – it saved $$$ we were able to use elsewhere. I’m sorry I don’t know where they were from – but definitely from about a decade ago!

What a beautiful transformation. From loads of color to sophistication. Such wonderful choices were made to give this a massive update. Well done!!

Thank you so much, Sheri!

Great job, Kristie! The paint alone made a huge difference, but all the furnishings made it so inviting!

A beautiful transformation, Kristie! And a nice respite to look at pretty beach house decor while in the frozen tundra of the northeast 🙂

Janet,
Ugh, I can’t imagine! When it hits the 30s in Nashville, I’m miserable. 🙁

What a beautiful job you’ve done on these transformations! That gorgeous off white with a touch of mint color you used is definitely misnamed by Sherwin Williams -> Silken Pink? Yikes! I never would have looked at it seeing it by that name, but I LOVE the color seeing it in these rooms you’re re-designed.

Growing up in FL as I did, my Mom used a similar but more intense version of that minty green on her walls, so it really brought back memories to see a paler (and prettier!) version used here.

And I love that you and your hubby spent part of your vacation time helping those still devastated by Hurricane Michael. What a thoughtful, nice thing to do.

Thank you so much, Leslie! The paint color is actually Benjamin Moore Silken Pine, not pink. I better go check and see if I spelled that correctly! 😉

You have such great vision – and awesome follow through. And bless you for helping with the hurricane clean up, my heart really goes out to all of the people affected by natural diasters.

Thank you for those kind words, Jeri. I wish we could have done more – the devastation was unbelievable. It will take many years for that area to rebuild.:(

What color blue did you use on the dresser across from the bunk beds?

Kristie, how exciting to read about your upcoming exterior paint course! I’m thinking about rebooting Reinventing Spaces sort of, and only doing what I enjoyed…that was color selection with clients! ❤️

Hi Linda, that is wonderful to hear! Actually, I shifted gears several months ago and decided to complete my interior colors online course first – which is just a few weeks from completion! I plan on prelaunching to my EPS graduates, so you’ll be hearing about it soon. I will complete my exterior course later this year. 🙂 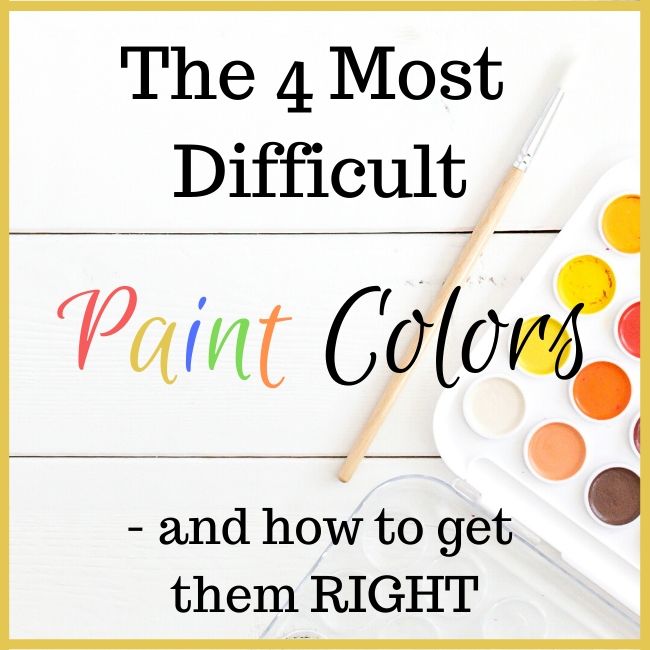 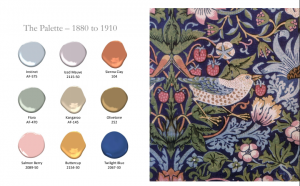 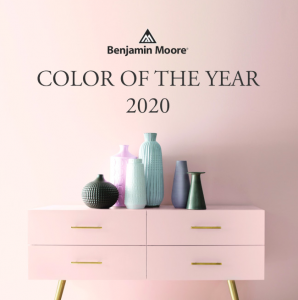